From track to tarmac. 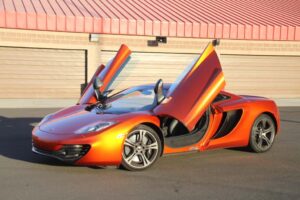 Move over Ferrari.  Step aside Lamborghini.  There’s a new kid on the supercar block and it’s got some mighty big aspirations.

“We’re a 50-year-old start-up,” suggests Antony Sheriff as he offers us our first close-up look at a running McLaren MP4-12C during a visit to Auto Club Speedway, on the outskirts of Los Angeles.  The exotic 2-seater is the latest attempt by the British maker to move from track to tarmac.  Its first effort was the $1 million McLaren F1, the second a joint venture with Mercedes-Benz that gave us the SLR AMG.  This time, McLaren is back to doing it alone — and taking direct aim at Italy’s two better-known supercar manufacturers.

It’s not that the company founded by New Zealand’s Bruce McLaren is an unknown entity.  In its nearly half century of motorsports McLaren has taken the checkered flag at one out of every four races it’s ever entered, making it a force to be reckoned with, year after year, on the Formula One circuit.  But the MP4-12C is aiming to strike the same fearsome chord on the street, giving gold chained Ferraristas reason to take pause – and perhaps to reconsider where they buy their next bella macchina.

And while the MP4 might have to do the heavy lifting for now, Sheriff reveals that McLaren has a whole host of other new products under development at its Lord Norman Foster-designed headquarters in Woking, Sussex — with plans to roll out one new model or variant every year “for the foreseeable future.”

The very first fruit of its labor, the MP4-12C, has taken seven years to bring to production – which may be why it’s getting such close and critical scrutiny.  Our own experience suggests there are relatively few things to gripe about and plenty to love.

If there’s any significant downside it’s the function-over-form strategy taken by McLaren’s chief designer Frank Stephenson.  It’s a very different approach from the elegant 612 Scaglietti, which Stephenson penned during a previous incarnation as head of Ferrari design, and decidedly less sensuous than the Italian maker’s new 458. 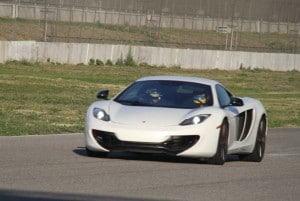 An MP4-12C blurring by on the Auto Club Speedway.

For his part, Stephenson makes no apologies for what he calls the “timeless efficiency” of the MP4’s knife-edged design.  The goal, he stresses, was to focus on maximizing performance – with an emphasis on factors like wind resistance – to produce what Stephenson likes to call “a ground-hugging aerodynamic missile.”

Another factor on the collective mind of the MP4 development team was weight.  You sense that in even the most subtle details, like the lithium-ion battery – something normally found in advanced electric vehicles – that replaces a conventional lead-acid battery and saving 22 pounds.  The magnesium dash frame, meanwhile, is light enough to be picked up with two fingers.

And then there’s the new 2-seater’s extensive use of carbon fiber, a technology that is the norm in Formula 1 racing but only beginning to migrate into production vehicles.  The original McLaren F1 used a carbon fiber tub that took 3,000 manhours to produce.  On the Mercedes-McLaren SLR it still took 400. 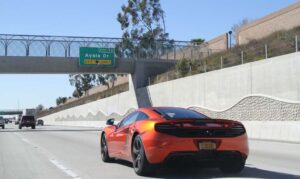 The patented McLaren hydraulic suspension delivers an unexpectedly pleasant ride on the freeway.

“Believe it or not, we got it down to four hours on this car,” Stephenson boasts, a major reason the MP4-12C costs, at $231,400, less than a quarter of what the old McLaren F1 went for – even before adjusting for inflation – and why the new supercar weighs in at a mere 2,900 pounds.

That’s despite the hunk of metal mounted amidship.  In fact, putting the MP4 on such a strict diet means the engine boasts a surprisingly modest 3.8-liter displacement.  The twin-turbo, 32-valve, DOHC direct-injection V-8 is no slouch, but at 593 hp and 445 lb-ft of torque it might almost seem anemic compared to the new Ferrari F12 Berlinetta’s 740 hp and 509 lb-ft.

Then again, the new Ferrari, the most powerful production car ever to wear the prancing pony badge, weighs in at a far less svelte 3363 pounds. 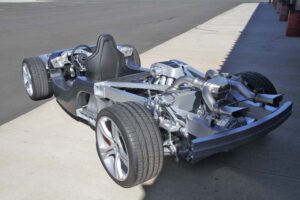 A look at the McLaren MP4-12C rolling chassis, including its carbon fiber tub and engine cradle.

Of course, neither car is simply designed for straight-line acceleration.  If that’s all you wanted you could spend less money and fix up one of Detroit’s newest muscle cars.

So, to get a better feel for what the McLaren is all about we pop open the scissor doors and take a look inside.

There’s something vedy British about what you find, the way all the leather and Alcantara is tied together with what we Yanks might call baseball stitching.  The cockpit echoes that timeless efficiency Stephenson professes.  No wasted details here but it also comes together with a delightful elegance. 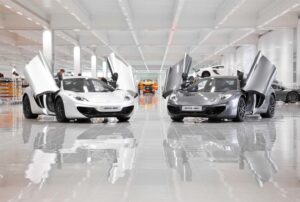 This is not your typical automotive assembly line.

Slipping inside, we’re quickly enveloped by the MP4’s supportive sport seat.  It’s got plenty of lateral support for hard cornering but it’s pleasantly easy to get in and out of, something not always the case with other exotics.

The center console is topped off by the red Start button.  Among the other knobs and buttons are controls that allow you to select between various suspension and performance settings.  Like more and more of its competitors, McLaren has opted for a dual-clutch transmission, a 7-speed here.  It’s a pleasantly intuitive package, we are soon to learn, but for those who insist gears are there to be worked there are readily accessible paddles behind the flat-bottomed, race-style steering wheel.

Firing the engine up, we tap the right paddle to slip into gear.  The response is soft and almost subtle, no jolt as the transmission engages.  Gently maneuvering through the parking lot we discover the folks at McLaren aren’t kidding when they suggest the MP4 is as comfortable doing daily driving duties as it is at a weekend track event. 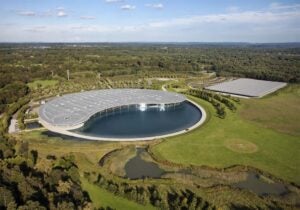 The McLaren "yin-yang" headquarters, designed by Lord Norman Foster. The MP4-12C's assembly plant is to the upper right.

Heading out onto the local roads the coupe maintains a gentile poise with the suspension in the Normal setting, none of the harshness that with many supercars can leave you with an aching kidney after even a short jaunt.  But as we head up a steep and winding hill our co-pilot, a long-time McLaren test driver, suggests we start to learn what the MP4 can do.

As we tip into the throttle the exhaust note shifts from a meek purr to an aggressive roar.  Don’t worry about turbo lag.  There isn’t any.  We’re sucked deep into the seat as the tachometer surges through, 5,000, 6,000, 7,00o revs, the engine just begging to give us more.  The McLaren-developed hydraulic suspension system quickly recognizes what we’re asking of it and hunkers down.  It’s almost a bit disconcerting how quickly we blast through the corners with only the most modest of body roll.

Shifting to Sport Mode tightens the suspension just that much more, inspiring even more confidence as we blast through 35 mph corners at what we shall only refer to as, ahem, extra-legal speeds.  Only when we turn to the Track mode does the ride turn truly harsh but at this point the MP4-12C starts to exhibit a mind of its own, seemingly knowing ahead of time where we’re going to point the nose next. 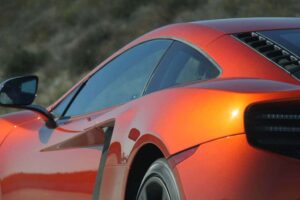 While not quite as sensuous as a Ferrari, the MP4-12C still has plenty of curves.

The McLaren is equally adept at scrubbing speed off, with either a “base” Brembo-designed braking system or an optional Brembo carbon-ceramic package.  As we discovered during a half-dozen laps on the Auto Club Speedway, you can dive even deeper into the straights thanks to McLaren’s Active Air Brake system, which provides plenty of downforce during high-speed runs – then puts up at a 69-degree angle to act like an aircraft-style air brake.

Add it all up and the price tag starts to sound almost cheap.  The MP4-12C is the rare sort of car that makes an amateur feel like a pro, while letting the pro push even further than they might have thought possible.