Hybrids the only segment where mileage dropped. 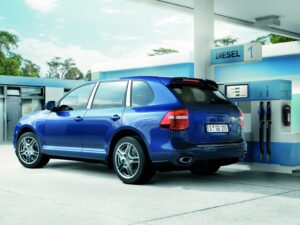 The mileage of the average diesel -- like this Porsche Cayenne diesel -- rose almost 10 mpg since 2008, according to a new study.

After years of little growth, the fuel economy of the typical new car sold in the U.S. is now rising rapidly, according to a new study that found that new vehicles are getting an average 14% better mileage than just four years ago.

That figure is an average of all the vehicles on the road but when weighted to reflect actual market demand, the shift away from large, gas-guzzling trucks to smaller, more efficient passenger cars and crossover, the shift is even more obvious, raising the average by another one to two miles per gallon.

“This implies that consumers tend to choose vehicle models with better fuel economy than the average of all vehicles available,” said Brandon Schoettle of the University of Michigan’s Transportation Research Institute, or UMTRI. “The recent economic downturn, coupled with rising gas prices, has led to an increased interest in purchasing more fuel-efficient vehicles,” he added.

Fuel economy improved for all 12 vehicle-size classes between the 2008 and 2012 model years. The largest increases were:

Ironically, during the study found one anomaly in the trend towards better fuel economy.  Mileage actually dropped 3 mpg for hybrids – though they are still more fuel-efficient overall than internal-combustion-only vehicles, according to the U-M study.