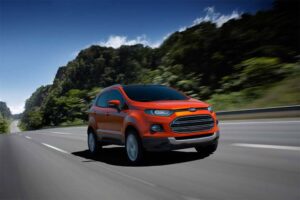 Ford is offering a first glimpse of a new mini-crossover that will share platforms with the maker’s global subcompact, the Fiesta.

Dubbed the Ford EcoSport, the new model made its formal debut this week at Auto Expo 2012, the big Indian motor show in New Delhi.  Underscoring the significance of the new model was the fact that Ford CEO Alan Mulally was personally on hand to lift the covers.

“The all-new Ford EcoSport reflects our commitment to serve our customers with the cars and trucks they truly want and value,” said the 66-year-old executive.

The latest example of the so-called One Ford strategy – which calls for using common platforms and body “top hats” for markets around the world – the EcoSport is primarily aimed at what Ford describes as “major worldwide growth markets,” notably including India, China and Brazil.

The new crossover was primarily developed in South America, though the project had extensive input from Ford’s seven other development centers, notably including those in Asia, Europe and North America.

Despite that, don’t expect to see the EcoSport come to the States, the maker cautions.  Certainly not any time soon, though a Ford source noted that the company’s small car strategy is in a state of ongoing evolution.  Until a few years ago it wasn’t even clear the Fiesta itself would be able to click with U.S. motorists.

Despite – or perhaps because of – the EcoSport’s compact size Ford has emphasized a rugged-looking, SUV-like design, with high ground clearance and integrated lower body cladding.  The rear of the crossover features a wraparound window and oblique taillamps.

The original EcoSport, launched in 2003, was sold only in Latin America.  The new model will be produced in Brazil, India and what Ford suggests are “other markets to be announced at a later time.”

Based off the maker’s global-B platform, Ford hopes it will help generate combined sales of 2 million units annually – including other models such as Fiesta.

“The new EcoSport is a significant milestone for our global product development process,” said Derrick Kuzak, group vice president, Global Product Development. “It proves that great small-car models for growth markets can be created in growth markets, using One Ford to leverage our global design and engineering expertise.”