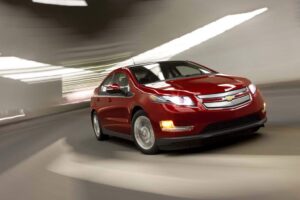 Did NHTSA inadvertently cause a fire after crash testing a Chevrolet Volt?

The spotlight is on the Chevrolet Volt following word that one of the plug-in hybrids caught fire while being tested by the National Highway Traffic Safety Administration. But TheDetroitBureau.com has learned that the fire was readily preventable had a few simple steps been taken after a Volt was put through a series of tests three weeks earlier.

Federal regulators have promised a full investigation of the spring incident in which the Volt caught fire and burned several nearby vehicles.  That has raised serious questions about the safety of its batteries, though GM officials say it may instead require adapting federal crash tests – as well as what happens in the field in the event of a real collision.

The fire occurred at a private facility in Wisconsin where the NHTSA conducts crash tests on new vehicles.  On May 12, the battery car was subject to a so-called “pole” test, where it is rammed into a barrier at 20 mph to simulate a side impact.  The vehicle was then subject to what is known informally as the “rotisserie test,” where it is rolled over into various positions to test for leaks that might have occurred during the crash.

Ironically, the Volt did well enough to earn a five-star rating, the best possible.

The wrecked vehicle was subsequently moved to what GM spokesman Rob Peterson called “the boneyard,” where it was left unattended, no action taken to deal with either the vehicle’s charged lithium-ion battery or the coolant fluid that had, in fact, leaked out after the crash test.  The gas tank used to power Volt’s back-up gas engine, however, was drained.

Preliminary evidence indicates that over time the normally inert coolant came into contact with some of the LIon battery cells.  In liquid form that would not be a problem, but it eventually “crystallized” as the Wisconsin weather turned cold at night, according to Peterson.  That eventually led to the battery shorting out and catching fire, apparently, though a formal cause has not been announced by safety regulators.

So, was the fire the cause of negligence by NHTSA? Maybe yes, maybe no, according to the GM spokesman, who told TheDetroitBureau.com. “NHTSA didn’t follow our protocol,” which would have required the agency to “de-energize the battery after the crash test.  But, Peterson quickly added that it appears NHTSA employees “didn’t know our protocol,” which was developed after GM conducted its own crash tests.

The federal agency has since been advised what to do when crashing a battery car, which apparently would include other electric vehicles besides the Chevrolet Volt, particularly those using liquid cooling systems.  (The Nissan Leaf uses an air cooling system, though it is unclear whether the maker will also be recommending that the battery be de-energized after an accident.)

“I want to make this very clear: the Volt is a safe car,” Jim Federico, the chief engineer on GM’s small and battery-powered vehicles, said in a statement. “We are working cooperatively with NHTSA as it completes its investigation. However, NHTSA has stated that based on available data, there’s no greater risk of fire with a Volt than a traditional gas-powered car.”

Repeated efforts to reach an NHTSA spokesperson failed as the federal government was closed on Friday for Veterans Day.

With electric propulsion capturing a disproportionate share of the headlines lately – at least compared to the miniscule market for battery-based vehicles, which will this year account for barely a 3% share of the U.S. market – world of the Chevy Volt fire has generated widespread headlines.

GM officials, meanwhile, are worried that the incident could scuttle demand for the vehicle, which is just beginning to see a ramp-up in sales.  But the impact could spread beyond Chevy showrooms.

The Obama Administration is looking to put 1 million battery cars on the road by 2015 and virtually every major automaker now has a plug-in hybrid or battery-electric vehicle in late development.

Lithium technology is already in widespread use.  And there have already been serious concerns raised about the use of lithium-ion technology, which has been linked to a number of fires involving laptop computers, mobile phones and other portable electronic devices.  That has led to restrictions on carrying or shipping the batteries on airplanes, for examples.

But automakers like GM have insisted they are using safer versions of the LIon chemistry than is often used in consumer goods, where it is critical to maximize energy density – or stored power.

While NHTSA may eventually give the Volt a clean bill of health, the Chevy plug-in was previously involved in an unexplained garage fire – though preliminary testing indicated the vehicle was not the cause of the problem.

Looking ahead, GM spokesman Peterson said GM plans to spread the word on the proper procedures for handling a Volt after a collision.  It is currently sending a corporate “SWAT team” out to any such incidents to try to learn as much as possible about what happens and how to respond.

The maker has been training first responders around the U.S. and one of the first steps involves disconnecting the battery.

By early next year, said Peterson, the maker expects to distribute a special device specifically designed to de-energize the battery after a collision.