A symbol of union’s decline. 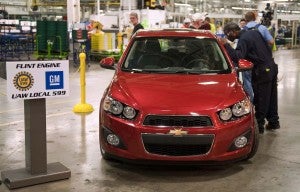 GM says the two-tier wage system lit shift production of the the Chevy Sonic to the U.S., but workers say they aren't getting a "living wage."

The United Auto Workers top leadership is facing a potential rebellion over the issue of the two-tier wage system approved for Detroit automakers, which has become a potent symbol of the union’s steady decline.

The two-tier wages were initially approved by the UAW in some contracts signed in the late 1990s but only entered the union’s critical contracts with General Motors, Ford and Chrysler in 2003.  The scope of the second-tier wage program was dramatically expanded in 2007 when union negotiators accepted the rationale promoted first by GM than by Chrysler that it would permit the companies to hire new workers and become more competitive against Japanese transplants.

The acceptance of the two-tier wage agreement four years ago also represented the tacit acknowledgement by union negotiators of the downward pressure asserted by non-union transplants in the Southeast. Some of the newest plants — such as the Volkswagen facility in Chattanooga, Tennessee that opened this year – are paying barely $15 in combined wages and benefits, fraction of what workers earn in Detroit.

Detroit’s Big Three say they need to match those lowerlabor costs to be competitive — but domestic workers insisting they’re not getting a “living wage,” and could make it difficult to negotiate new contracts in the weeks ahead.

To get contracts containing two-tier wages ratified in 2007 union bargainers told their constituents the two-tier wage was essentially temporary and at one GM plant in Flint dozen of new workers were hired under the traditional wage scale to help ensure ratification of the proposed agreement. The two-tier language was more firmly entrenched, however, when the UAW modified its contracts with Chrysler and GM to help them win federal bailouts and emerge from bankruptcy.

This year, negotiators for GM, Chrysler and Ford – all of whom are increasing their use of the two tier program — have very little incentive to raise the wages of workers assigned to tier two as bargaining moves towards its official conclusion Sept. 14. All three companies have indicated they will resist efforts to change the entry-level wage and benefit package, which is helping them contain costs.

“The old model didn’t work,” said one top negotiator, who asked not to be identified.

The makers point to their improved financial performance – and to the increased hiring of union workers.  GM, for example, recently decided to transfer production of its small Chevrolet Aveo– renamed the Sonic – from a Korean factory to a suburban Detroit plant because the two-tier system makes it cost-effective to now produce subcompact vehicles in the U.S.

For UAW President Bob King the two-tier wage issue also has been a difficult one to resolve. On one hand he says the entry level wage ought to be increased. But on the other he also wants to help the domestic carmakers remain competitive even it means keeping a lower-tiered wage scale.

In addition, King also knows from union history it is almost impossible to win back something during negotiations once it has been lost without a full-scale confrontation such as the epic GM strike of 1970 in which the UAW won back its cost-of-living allowance.  Both sides nearly went broke in the wake of that costly battle.

This time around King has promised to avoid confrontation – in fact, the UAW is barred from striking both GM and Chrysler under terms of the 2009 federal bailout — and his chief lieutenants in this year’s bargaining are not promoting any kind of militancy. The union also wants to avoid the contracts being decided by an arbitrator at General Motors and Chrysler.  That would be required by law if there is a deadlock came September 14th.

But the union’s dissident faction remains alive and is preparing to make two-tier system the top issue in this year negotiations. Over the weekend unhappy UAW activists met in Detroit to take testimony from union members about the problems created by the two-tier system.

“There shouldn’t be a tier one or a tier two or a tier three, four or five,” said Mark Harris, a worker at a Ford Motor Co. parts plant in Saline, Mich.  “There should just be one wage. A UAW wage.”

“The next generation of workers is being discriminated against with the second tier. With the two-tier wages, there is no job security in the UAW,” added Nick Waun, who led a protest last year against two-tier wages at GM assembly plant in Orion Township.

Gary Walkowicz, a committeeman from UAW Local 600, who led a successful campaign to block contract changes at Ford in 2009 said union members have to prepare to confront the UAW’s leadership as well as the automakers if they want to see the two-tier wages eliminated.

“We have an opportunity in four weeks … to fight back,” said Walkowicz, who represents workers at Ford’s Dearborn Truck assembly plant, which is probably the most profitable plant in the automotive business right now.

Other union members also warned that the contract at GM and Chrysler could be voted down unless the tentative agreement includes substantive changes to the two-tier system.

Alex Wassell, a member of UAW Local 869 at Chrysler’s Warren stamping plant, said he senses workers are ready to reject an agreement this year to register dissatisfaction with the two- tier wages and other issues. “They can’t strike so we may as well vote it down two or three times,” he said.