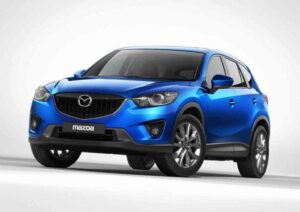 The new Mazda CX-5 crossover will first appear in Europe but will follow to the U.S. market, as well.

Mazda is offering the first official sneak peek at the latest in its expanding line of soft-roaders, the new CX-5 scheduled to make its first appearance in the sheet metal at next month’s Frankfurt Motor Show.

As with the recently launched Mazda5, the new crossover will bear the distinctive imprint of Mazda’s latest design language, dubbed Kodo. (For more on the Mazda5, Click Here.)  But perhaps more significant is the fact that the CX-5 will be the first new product from the Japanese maker to use Mazda’s new SkyActiv powertrain technology.

Since all but splitting off from its longstanding ties to Ford Motor Co., Mazda intends to steer clear of hybrid technology – for now, at least – putting its emphasis on SkyActiv, a system that it claims will dramatically improve the fuel economy of both its gasoline and new diesel-powered engines.  Indeed, Mazda is on a path to become the first Japanese maker to offer an oil-burner option.

Translated as “soul of motion,” the Kodo design language first appeared on the Minagi and Shinari concept vehicles.  It adds a decidedly more sculpted appearance to both the Mazda5 and the CX-5, though the crossover skips the sand dune-like wave patterns stamped into the wagon’s doors.

Mazda offers relatively few details about the CX-5, though it does note that it relies on an all-new platform – one expected to be shared with a number of other future Mazda products.

Set for debut at the Frankfurt Mess on September 13, the new crossover will debut in Europe first then follow across the Atlantic.

The European version will offer both a 2.0-liter SkyActiv gasoline engine and a 2.2liter SkyActiv diesel.  Those engines use unusually high 14:1 compression ratios to boost performance and fuel economy while lowering emissions.  Several engine variants, including High Power options, will be offered.

High-efficiency SkyActiv gearboxes are reportedly also in the loop, though Mazda is holding back details for Frankfurt.  But anticipate 6-speed manual an 6-speed automatic options.