SpaceShipOne’s Burt Rutan Tries His Hand at a Flying Car 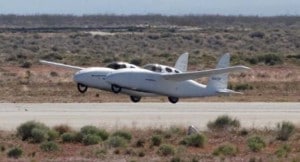 If there’s one thing Burt Rutan is good at it’s turning dreams into reality.  His Voyager was the first plane to fly around the world without stopping or refueling.  And his suborbital SpaceShipOne not only claimed the $10 million Ansari X-Prize but is helping in motion the dream of private space flight.  So, who better to transform the long-running fantasy of the flying car into something real?

With the unveiling of his Model 367 BiPod, Rutan and his firm Scalred Composites become the latest in a series of visionaries – dating back to at least Henry Ford – hoping to find a functional way to combine a car with an airplane.

It isn’t quite George Jetson’s briefcase aerocar.  The BiPod uses an unusual design with, as the name suggests, a twin, pod-like fuselage which not only provides two cockpits but protected storage for the wings and tail surfaces while operating on the ground.  The right pod handles airborne duties, the left takes control on the ground.

But perhaps the biggest surprise of the BiPod is its source of power.  Rutan – who developed the concept before retiring last April – has always been a fan of light and energy-efficient designs.  He’s been experimenting with personal electric aircraft for more than a decade.  And with the Model 367 he has adopted an extended-range electric system that is quite similar to that of the Chevrolet Volt.

Twin gas-powered generators, one in each fuselage, drive the electric motor spinning the propellers.  Lithium-ion batteries in the nose of each pod provide additional power during takeoff and landing – and can provide back-up power during an emergency.  That’s particularly significant as one of the most treacherous emergencies for any twin-prop aircraft involves the failure of one of the engines during takeoff or landing.

Though some have considered the possibility of going all-electric, Rutan apparently ruled that out because of limited range.  The BiPod has STOL – or Short Takeoff-and-Landing – capabilities, can hit a maximum 200 mph in the air while easily cruising at 100, and it also gets as much as 700 miles on a tank of fuel as long as you don’t push the speed.

Unlike some other autoplane concepts, Scaled Composites claims the BiPod doesn’t have to pull over onto the right lane when it comes to keeping up with freeway traffic.

The foldaway wing design, meanwhile, makes it possible to store the four-wheeled craft in most garages.  When airborne, the BiPod has a 31-foot wingspan.  In car configuration it measures just seven feet wide, about the same as a Hummer H2 – the low center of gravity and wide track, Scaled claims, improving stability both in the air and on the ground.

A prototype of the Model 367 BiPod was flight-tested within just four months of the preliminary design development, something unheard of in either the aerospace and automotive industries.  Whether it will ever see production is another matter, however.

But what is expected to serve as part of the final legacy of the legendary Burt Rutan will continue testing using both the hybrid and other potential powertrain combinations.

And Scaled Composites isn’t the only company pursuing the dream.  As TheDetroitBureau.com reported earlier this month, the Terrafugia Transition is moving forward, with flight testing planned for the months ahead.  (For more, Click Here.)  Meanwhile, the Defense Dept.’s research arm, DARPA, has issued a call for the development of a flying car that could help a small squad of soldiers leapfrog from hot spot to hot spot in a hurry.  There are six finalists in the Transformer (TX) program and working prototypes could be airborne within a year.