Infiniti Motorists Get Their Own Personal Assistant

Buyers will have instant access to scores, dining advice, stock quotes and more. 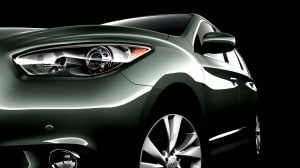 The upcoming Infiniti JX crossover will be one of the maker's first to offer the new Personal Assistant service.

Infiniti has unleashed a new weapon in its war with other luxury brands—a personal assistant.

No, Infiniti buyers won’t get their own personal concierge riding shotgun, but they will be able to call one 24/7.

Infiniti’s announcement comes just as Ford Motor Co. reveals it is beta testing the new Operator Assist program.  Until now focused on using an on-screen or synthesized speech interface, the Detroit maker is providing access to a live operator for locating businesses and getting turn-by-turn directions.

The world of so-called infotainment technology has been expanding rapidly and is becoming increasingly competitive as makers rush to out-do their rivals with new features.  But manufacturers are also discovering that while technology like Personal Assistant and Sync can win over tech-savvy fans, it may also frustrate some, typically older, customers.

The Infiniti Personal Assistant system is available for no cost through the first four years of ownership and companion accounts for spouses, children, and others are available at an additional cost.

The system also will be available on used Infinitis, with certified pre-owned vehicles being offered a four-year plan and non-CPO cars eligible for a one-year plan. No word on what the cost will be after the initial four years is up.

There are already navigation systems on the market that can provide sports scores, Zagat ratings, and other such info, and Ford’s Sync and GM’s OnStar, along with a few other similar systems, can provide emergency assistance as well as some of the other services listed above.

So Infiniti hopes to win kudosfor marrying the two ideas into one system that allows drivers to contact with a real live human. There is a cost to a manufacturer for providing live operators, of course, especially on a free service like Infiniti’s or Ford’s.  But the makers hope there are advantages, as well.

Ford, in particular, has faced criticism from the likes of J.D. Power and Associates and Consumer Reports for the complexity of its latest Sync updates, incorporated in the new MyTouch systems.  Allowing motorists to skip the synthetic speech and multi-layer video screen menus could reduce such complaints.  (For more on Ford Sync’s new Operator Assist, Click Here.)

Technology keeps changing the way that we interact with our cars, and this is yet another step in the march to the future.  Giving a call center a ring for dining advice isn’t the same as visiting the concierge desk at a fancy hotel, but it’s as close as you can get, unless you have enough spare cash to hire your own personal assistant.

Of course, if that were the case, you might be rolling in a Bentley.