Maker betting use of sun power will double by 2016. 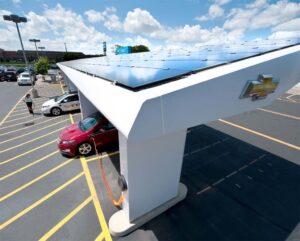 Sunlogic solar canopies will be used at a variety of GM dealerships and other operations.

General Motors Ventures, GM’s private venture capital fund, will investment $7.5 million in Sunlogics PLC, a firm specializing in solar projects.The investment reflects estimates that the use of solar panels will double between now and 2016.

Sunlogics will shift its headquarters to Michigan and in the process create 200 new jobs in the Detroit suburb of Rochester Hills.

Officials say GM Ventures is looking for more projects in which to invest, and is particularly interested in projects in infotainment, advanced materials and advance manufacturing.

“There is an obvious bias towards clean energy,” saiid John Lauckner, president of GM Ventures, the $100 million fund created last year to invest in companies with advanced technology.

About $45 million of the initial $100 million GM put into the fund has been invested in six different projects, Lauckner said. The fund has also assumed control of two investments in biofuels made before the fund was created.

“Global solar energy use is predicted to more than double by 2016, so we believe that investing in renewable energy is a smart and strategic business decision,” said Lauckner,

The executive said GM also signed commercial agreements with Sunlogics for the installation of solar charging canopies at Chevrolet dealerships and various GM facilities, as well as a power purchase agreement to install large-scale solar arrays at GM facilities and purchase the energy they produce.

“The Chevrolet solar charging canopy project complements our electrification strategy that started with the Chevrolet Volt by helping our cars live up to their fullest green potential,” Lauckner said.

Two dealerships, one in Grand Blanc, Mi. and another in Modesto, Calif., already have installed the canopies and nine more are under construction while planning is underway for installation at another 23 dealerships across the country.

“The investment in Sunlogics allows GM to strategically partner with a leading solar developer and operator that can help GM drive the use of solar, specifically large-scale solar installations at our facilities,” Lauckner said. “Sunlogics was the ideal choice because it is a vertically integrated company that has a global footprint,” he added.

“We are looking forward to further assisting our customers in reducing their carbon footprint with sustainable renewable energy,” Matvieshen said.

Sunlogics’ management has experience developing and operating solar commercial installations in Canada, the United States, and Europe.
As part of today’s announcement, General Motors committed to double its solar energy output globally by the end of 2015.

“Our GM facilities currently house 30 megawatts of solar power, and we are committing today to double that capacity to 60 megawatts over the next few years, which is equivalent to powering 10,000 homes annually,” said Richard Threlkeld direct of GM Energy, Environment & Safety Policy.

Not only does renewable energy make good business sense, it helps us continue to reduce the impact our facilities have on the environment,” Threlkeld added.