GM Confirms Chevrolet Cruze Diesel for 2013; Could Get 51 MPG

Will other makers follow with diesels of their own? 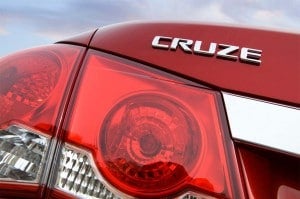 Chevy will add a diesel to the Cruze line-up for 2013.

General Motors has formally confirmed it will add a high-mileage diesel to its Chevrolet Cruze line starting with the 2013 model-year.

The long-rumored diesel is likely to be an adaptation of the 2.0-liter VCDi direct-injection “oil-burner” already offered in Europe on their version of the Chevy compact.  Insiders report that the diesel could deliver as much as 51 miles per gallon – significantly more than the current Cruze Eco and in line with the Toyota Prius Hybrid.

For its part, GM won’t do more than confirm plans to add the diesel, but that is a distinct reversal of the company’s long-standing opposition to the technology.  Former GM car czar Bob Lutz, in particular, had argued that the cost of meeting U.S. emissions standards was too high.

Of course, GM also worried that potential buyers might recall the massive problems a prior generation of the company’s diesels experienced.  A senior official once acknowledged to TheDetroitBureau.com that GM may have all but single-handedly killed off the technology in the ‘80s with problem-plagued diesels like the ones used by Oldsmobile that experienced an extraordinarily high rate of catastrophic failures.

It didn’t help that the diesels of the ‘80s were sluggish, noisy and smelly.  But the newest designs have resolved those issues.  They’re quiet, clean and quick – especially using turbocharging, direct injection and the latest emissions equipment.  But cleaning up a diesel’s particulates and oxides of nitrogen doesn’t come cheap, the added hardware typically adding thousands of dollars to what is already an expensive powertrain.

But they deliver the performance that hybrids typically lack and often match that with better highway mileage.  (Significantly, the mileage projected for the Cruze diesel would nearly match that of the Prius even without the extensive bodywork and other one-off modifications made to further boost the efficiency of the Toyota hybrid’s gas-electric driveline.)

As a result, diesels have captured roughly half the European automotive market.  In the U.S., they have a fraction of that volume, though even with extremely limited availability diesel sales are starting to approach the roughly 2% share held by hybrids.

It’s unclear how Chevy will market the Cruze diesel.  Its current high-mileage offering, dubbed Cruze ECO, gets just over 40 mpg on the highway, so Dave Sullivan, auto analyst with AutoPacific, Inc., wonders whether that version’s gas engine will be replaced by the higher-mileage diesel.

Either way, he says, “This is great news.  It’s an untapped opportunity.  Volkswagen has proved buyers are willing to pay a premium for small diesel cars.”

While domestic makers do offer diesels for their big trucks – such as the heavy-duty Chevrolet Silverado – American and Japanese makers have, until now resisted moving the technology into their passenger car line-ups.  That has been a bonus for European makers, such as Mercedes-Benz, BMW, Audi and Volkswagen.  On some models, diesels now account for 25% of total sales, and the European makers say they could reach higher were it not for limited availability of diesel-powered models.

The shift in course at Chevrolet could nudge other makers to move diesels into their line-ups.  Chrysler is looking at adding a Jeep diesel in 2014, and it helps that the maker has access to diesels produced by its European alliance partner Fiat that could be used in its U.S passenger cars.

As for the Japanese, Mazda has indicated its interest in bringing a version of its new SkyActiv Diesel to the U.S., probably in the midsize Mazda6.  With no plans to push into hybrids, the technology would be critical for high-mileage bragging rights.  Honda has wavered on its commitment to diesel but may also see the need to respond to Chevrolet’s move, industry sources suggest.

“This is just the beginning of automakers beginning to explore all sorts of ways to improve their fleet mileage and instead of being a follower, GM, for once, is taking the lead,” said Sullivan.  “I hope this move proves contagious.”