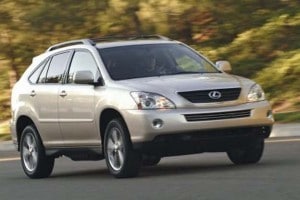 The Lexus RX400h is one of two Toyota hybrid SUVs affected by the latest safety recall.

Toyota will recall more than 82,000 hybrid SUVs sold in the United States due to potential wiring defects.

The news is another setback for the Japanese giant, which has been struggling to regain control over its quality after a series of safety-related problems that led it to recall more than 10 million vehicles last year – and which have spurred a flurry of lawsuits now working their way through the courts.

The new recall comes as the credit rating agency Moody’s Investor Services downgrades Toyota’s debt and warns that the maker’s problems may be serious enough to warrant another downgrade in the coming months.  (Click Here for that story.)

According to the maker, the hybrids may have computer boards with improperly soldered connections.  Under “high-load” driving conditions those connections could break.  In turn, a vehicle might either operate at reduced power for a short distance or coast to a stop.

The company plans to produce replacement parts and will then notify owners affected by the recall in July.  Repairs will be made at no cost, Toyota notes.

Toyota’s traditional reputation for building “bullet-proof” products came under question as it began a series of recalls in late 2009, a number of them related to the issue of “unintended acceleration.”  But the maker suffered a variety of other issues, including excessive corrosion with its minivans, and faulty brakes on the latest-generation Prius hybrid.

In all, more than 14 million vehicles were recalled worldwide between October 2009 and the end of 2010.  The maker also paid a series of record fines to the U.S. government for delaying its response on several recall problems.

The good news for Toyota is that it experienced a notable rebound in the 2011 J.D. Power Initial Quality Study, released last week, the maker’s Lexus brand landing in the #1 spot. (For more on the latest IQS results, Click Here.)