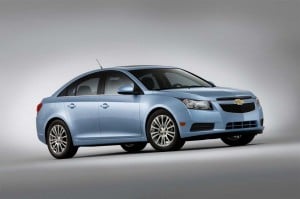 Will GM add a coupe version of the Cruze to give its compact line a more sporty attitude?

Nobody’s confirming anything. But nobody at General Motors is flatly denying it either.

Rumors are circulating that GM is getting ready to introduce a two-door version of the Chevrolet Cruze – and sources suggest the decision may have been made to produce the compact coupe at the company’s assembly plant in the Detroit suburb of Orion Township.

The plant is being readied to begin building the Chevrolet Sonic small car in the third quarter, with production of the all-new Buick Verano to be added a bit later on this year.

But during an open house at the Orion plant this week – one of 54 such dog-and-pony shows GM is hosting at each of its manufacturing plants this year, company officials once again brushed aside questions about the two-door Cruze.

The entire focus inside the plant now is on launching the Chevrolet Sonic, insisted factory manager Alice Boler-Davis. “It’s exciting,” she said because Orion will be the only plant in the U.S. building a small subcompact.

To make it possible to bring the project to the States – rather than producing the Sonic in South Korea – many new workers at the Orion plant will be working under a two-tier wage structure earning about half the wages paid more senior members of the United Auto Workers Union.

GM currently builds the four-door Cruze exclusively at the company’s big assembly plant in Lordstown, Ohio but the car’s success has the plant running up against capacity, even with overtime.

In an unexpected turn of events, Cruze was America’s best-selling compact nameplate in May – though that was at least partially the result of the shortage of Japanese competitors, notably including the new Honda Civic.  Nonetheless, GM officials are hoping that they’ve finally landed a real competitor in a mix normally dominated by Asian brands – which could bode well for the addition of a coupe body to the Cruze line.

The Orion plant, notably, has been equipped to build multiple models. In addition, its innovative labor contract makes it all the more appealing to use it as a base for a lower-volume niche model.

GM North America President Mark Reuss has dropped some broad hints about adding a two-door and GM seems determined to beef up the Cruze’s image – both here and abroad.

For example, it’s started racing the Cruze in Europe and is working at giving the car a sportier image in North America. Whether the image campaign ultimately pays off is an open question. However, adding a sporty coupe to the model line probably wouldn’t hurt.