Is a U.S. version in the cards? 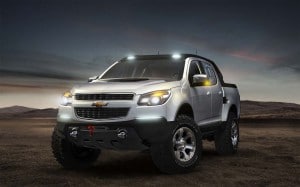 General Motors has offered a sneak peek at the new, South American-designed, midsized Chevrolet Colorado Rally truck.  Making its debut at this week’s Buenos Aires International Auto Show, the Rally is the second show-truck version of the automaker’s next generation global midsize pickup, which was designed by engineers at GM do Brazil.

The debut of the adventure-themed Rally comes on the heels of the reveal of the first Colorado show truck at the Bangkok Motor Show this past April and the decision underscores the importance GM places on the market in Argentina – which senior company officials recently forecast could grow to become larger than Mexico’s automotive market. Sales of new vehicles in Argentina are expected to climb past 1 million units in the near future, GM officials said.

But what remains unanswered is whether the new truck will make it to the U.S. market.

“Both trucks give a glimpse of the next generation Chevrolet global midsize pickup, which is of huge importance to consumers in many countries around the world.  For example, in Brazil, customers made Chevrolet’s midsize truck the vehicle segment leader for 16 consecutive years,” said Brad Merkel, GM Global Vehicle Line Executive. 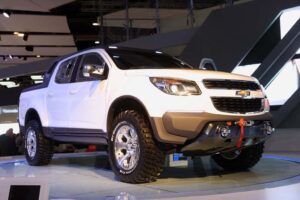 In show car form the Colorado Rally is powered by a 2.8-liter diesel, but GM has gas engines available, too.

“Colorado Rally exhibits Chevrolet’s DNA in an off road version. To develop this vehicle we did extensive research on the off- road Motorsport. Each and every detail was deeply studied in order to deliver maximum authenticity, designed with the rally raid category in mind, also known as cross country rallying”, says Carlos Barba, GM South America Design Center director.

Colorado Rally is a crew cab version with a tri-dimensional front grille featuring chromed details.  The truck unveiled in Buenos Aires came with body color is a triple coat Pearled White with golden particles, and other external components in textured charcoal. Skid plate and side moldings in liquid metal and bead lock off road wheels milled from a single piece of aluminum.

The truck is powered by a 2.8-liter inline-four diesel sending power to all four wheels.  But Chevy also has a gas engine that could very well be used for a U.S. version.  That is, of course, if the maker decides to bring the new pickup to the States.

Ford has opted against replacing its aged Ranger with the well-reviewed new model it recently launched in Thailand.  The maker believes that customers will be more than happy with the bigger F-Series, especially with the introduction of a new, fuel-efficient V-6.

Clearly, demand for compact pickups has faded in the States, as Toyota’s Tacoma also loses ground and Korean makers Hyundai and Kia opt not to enter the segment.

Still, industry sources believe there’s enough of a market that GM eventually will bring the new Colorado to American showrooms.