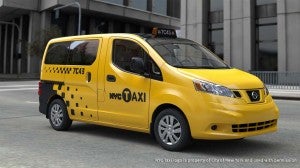 After years of dominating the New York taxi fleet Ford Motor Co. will soon be driving off into the sunset. The domestic maker lost to Nissan in a shoot-out to determine who will become the Big Apple’s taxi of tomorrow.

The decision, which will see thousands of yellow Nissan NV200 vans roaming the streets of America’s largest city, was announced by the New York Taxi and Limousine Commission, along with Mayor Michael Bloomberg and Nissan Americas CEO Carlos Tavares.

“Nissan is proud to provide the next generation of taxis for the City of New York,” said the Nissan executive. “The NV200 taxi will give Nissan the opportunity to showcase our dedication to vehicle quality and urban mobility to more than 600,000 passengers every day.”

The deal, worth an estimated $1 billion over the next decade, could eventually lead to the complete replacement of the current NY hack fleet, which currently consists of 16 different models, from the once-ubiquitous Ford Crown Victoria to Honda minivans and Ford Escape Hybrids.

Nissan was up against not only Ford, which… but also an offering from the Turkish carmaker Karsan Otomotiv – which proved an early favorite, winning a popular vote among NY cab riders.

But in the end Nissan battled back against the upstart and the long-established king of the taxi hill with a modified version of its new NV200 commercial van.  The vehicles, which will be assembled in Cuernavaca, Mexico, will be sold for around $29,000 when they start arriving on the streets of the City in two years.

They’ll offer sliding doors and significantly more room than most of the current taxis in use in New York.  They’ll also feature such niceties as a “low-annoyance” horn, rather than the blaring trumpets that add so much noise to city life today.  When a driver honks the horn, meanwhile, exterior lights will flash to help get the message across.

The vehicles will be powered by a 2.0-liter 4-cylinder engine, delivering significantly less power than the current Crown Vic models but helping reduce both pollution and fuel consumption, officials noted.

The decision to seek a new cab was driven by a variety of factors, not the least of which was concerns about the mileage of vehicles constantly on the move.  There had been some early consideration of using advanced hybrids – like the Ford Escape models.  Nissan’s Tavares promised to provide “up to six” Leaf battery cars to see if they could be suitable for use in taxi fleets.

The Turkish offering appeared to initially have the edge over those from the better-known automakers because it featured a transparent roof that would be great for sightseeing, as well as a roll-out ramp for wheelchair access.  Karsan had also promised to produce the new van in New York City, using union labor.

But critics noted that the maker had no working model to show what it could do, and cautioned that surviving the city’s deeply potholed streets would be a challenge for all but the most ruggedized vehicles.