How to Wreck An AMG Engine in 5 Seconds 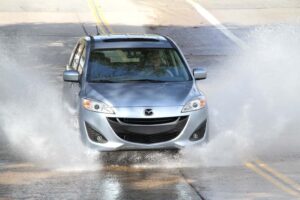 Driving through a flooded road can be a dangerous -- and costly -- mistake.

The storm lasted no more than an hour.  The sky had turned green, the tornado sirens sending folks racing for shelter.  But in the end, the only thing that reached the ground was a torrential downpour that quickly overwhelmed sewers, creating deep ponds of water over many busy streets.

The driver of the new Mercedes-Benz SL65 AMG paused for a couple moments wondering whether to turn back, but after watching a half-dozen other cars splash through the deep water that had formed on Dearborn’s Village Road he decided to give it a chance.

Cautiously, he pulled ahead, his right wheel riding the curb, but a car going the other direction sent a wake splashing towards the German sports car which gave an unhealthy hiccup and came to a sudden stop.

The engine of the $150,000 SL, it turns out, had just hydrolocked.  Short for hydrostatic locking, that occurs when an engine designed to compress an air-fuel mixture suddenly takes a gulp of water which, as any physics student can tell you, cannot compress.

Not quite a case of immovable object meeting irresistible object, perhaps, but the effects were just about as bad.  When the car was towed to the dealership and the mechanic drained nearly a gallon of water that had been gulped up by the SL’s intake system the driver was given a very costly souvenir – a piece of an engine that had essentially been blown apart. While the driver won’t reveal the precise cost of the repair he hints it was in the “tens of thousands of dollars” to replace the hand-assembled 6.5-liter engine.

Similar incidents occur quite frequently after heavy downpours, especially like those facing much of mid-America this week.  And overwhelmed drains, creeks and rivers mean the possibility of running into a flooded roadway is quite a real threat.

The simple rule is to avoid trying to cross any standing water more than a few inches deep, especially if you are driving a low-slung sports car, where the air intake is very likely to be close to the ground.  These days, even some relatively mainstream models, like a Ford Taurus SHO, have low-mounted air intakes for their high-performance engines.

Usually, it’s safe to take water up to the bottom of the bumper, but if there’s an air inlet below that, make sure it will remain completely clear.  And be aware that water can splash higher than you expect, especially if there’s a car coming through in the other direction.

So, if you find you must cross standing water:

Flooding is possible in parts of the country you might not expect, like Arizona, where heavy downpours can lead to sudden surges in normally dry riverbeds.  Pay attention to news and weather reports when your normally desert-like community has a sudden rainfall.  On some roads prone to flooding, especially where there may be steep dips or underpasses, there may even be gauges, like you see at a bridge, showing just how deep things have gotten.

If at all possible, simply turn back and look for an alternate route.  A flooded road can destroy an engine, even sweep away your car and risk your life if it’s moving fast enough.