BMW Offers an Homage to Original 328 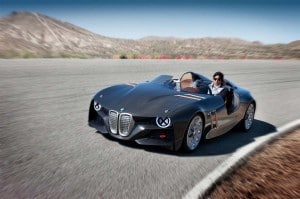 BMW's 328 Hommage honors the 75th anniversary of one of the brand's most influential products.

BMW is offering up an homage to what was arguably one of the most beautiful – and fast – sports cars of its era, the legendary BMW 328, which dominated racing and strongly influenced design three quarters of a century ago.  Make that a “Hommage.”

The new BMW 328 Hommage, which marks the 75th anniversary of the original two-seater, made its debut at this month’s Villa d’Este Concours, on Lake Como.  But while it might harken back to an earlier era, the prototype also offers a glimpse into the future.

The Italian debut of the Homage was more than coincidental – Villa d’Este ushering in the annual classic car circuit.  The original BMW 328 was a terror on the racing circuit and the Touring Coupe still holds the record for turning in the highest average speed on the grueling Mille Miglia circuit, averaging 103 mph on the street course back in 1940.

“With the BMW 328 Hommage, we wish to pay homage to the passion and inventiveness of the fathers of the BMW 328”, explains Karl Bäumer, CEO of BMW Group Classic. “They created an icon, which is considered a milestone in the history of the automobile.” 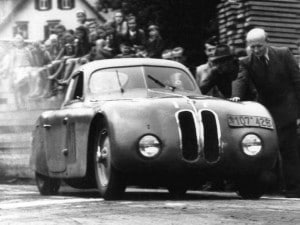 The Touring Coupe version of the original 328 dominated its class more than seven decades ago.

The new model not only picks up some of the styling cues of the original 328 but also honors its focus on holding down weight.  The original designers did it with extensive use of magnesium and aluminum, significant advances for that era.  The 328 Hommage turns to carbon fibre-reinforced plastic, or CFRP, arguably the strongest and lightest material today available for automotive applications.  That helped hold the weight of the new 2-seater down to just 1720 pounds.

BMW is investing heavily in CFRP aiming for breakthroughs in cost and manufacturability.  The light, strong resin-based material could yield tremendous advantages for electric vehicles, like the new BMW i3 and i8 models, where weight strongly influences range as well as performance.

Like the original, which made its track debut in 1938, the BMW 328 Hommage has no doors, relying on deep recesses to provide access to the cockpit.

The show car also picks up on the slim vertical twin kidney grille of the original 328.  It was one of the very first to adopt that functional design cue, now synonymous with the BMW brand.

Other details lifted from the original:

That’s not to say the 328 is entirely retro.  There are very modern four-point seatbelts, and a pair of iPhones have been integrated into the interior.  They compliment the Hommage’s basic, racing-style gauge cluster and offer additional functionality, including stopwatch and GPS routebook features. There’s also the “bone,” an emergency shut-off switch for the vehicle’s electronic system that is mounted between the seats.

A special quick-release “bonnet,” meanwhile, provides immediate access to the BMW 328 Hommage’s powertrain, which is built around the Bavarian maker’s current 3.0-liter engine.