Demand up - but so are prices, as shortages loom. 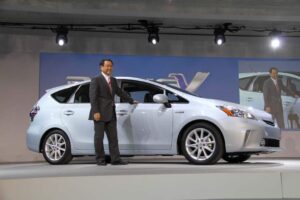 Toyota CEO Akio Toyoda with the Prius V hybrid during the Detroit Auto Show preview of the microvan.

Toyota Motor Sales has reported the one-millionth sale of the Toyota Prius, the first mass-produced gas-electric hybrid vehicle sold in the United States.

“Since the Prius went on sale eleven years ago not a year has gone by when it hasn’t been the number one selling hybrid vehicle in the U.S.,” said Bob Carter, Toyota Division group vice president and general manager.

Prius has become synonymous with the word hybrid, Toyota suggest, and as fuel prices have risen again, it has garnered a full 60% of the American market for gas-electric vehicles — but prices have gone up sharply, along with demand and the crisis in Japan could soon leave the maker short of demand.

Though Prius remains the leader, the executive noted, it is now facing more competition than ever. Today, 13 different brands offer some form of gas-electric model, and most of the remaining marques, such as Volvo, plan to enter the market with some sort of hybrid offering within the next several years.

Prius was the world’s first volume production gasoline-electric model, though by no means the first hybrid.  Ferdinand Porsche actually introduced the technology a century ago.  And while Toyota led development in Japan, Prius actually arrived in the U.S. after competitor Honda crossed the Pacific with its first-generation Insight.

But while Honda also has expanded its line-up, Toyota remains the segment’s volume leader.

Vehicles for 2011. It has been named the Best Overall Value of the Year for the last nine years in a row by IntelliChoice, and has the highest owner loyalty of any mid-size vehicle for four of the last five years according to R.L. Polk. More than 97 percent of all Toyota Priuses sold since 2000 are still on the road.

Since it was introduced in the U.S. in 2000, Toyota estimates Prius owners have saved an estimated 881 million gallons of gas, $2.19 billion in fuel costs, and 12.4 million tons of CO2 emissions compared to comparable, conventionally-powered vehicles.

The maker is now on its fourth-generation Prius.  And, in January, at the North American International Auto Show in Detroit, Toyota debuted the Prius v, the first vehicle that will become part of a new the Prius family of hybrids.

But the Japanese launch of the Prius V has been delayed due to the crisis touched off by the March 11 earthquake and tsunami that has sharply curtailed automotive production in that country.  It is so far unclear if the U.S. launch, later this year, will proceed on schedule.

Toyota is slowly ramping its home-market assembly lines back up to speed and has put a priority on production of the Gen-4 Prius.  Nonetheless, industry analysts  anticipate shortages at a time when near-record fuel prices have once again boosted demand for the hybrid.

Dealers around the U.S. have been driving up prices, according to data collected by groups such as TrueCar, the typical buyer is currently paying about $3,000 more for a Prius than at the end of 2010.  Toyota itself plans a formal price increase on May 1.