The Bug is back. 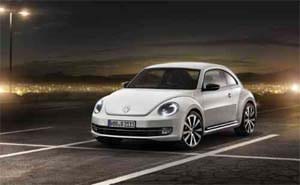 VW returns to a more classic design with the 2012 Beetle.

It’s been nearly three-quarters of a century since the first Volkswagen Beetle made its debut – and more than a decade since the German maker unveiled the current Bug.  So there’s been plenty of anticipation building for the all-new model getting its global launch this week.

In an unusual, multi-city event linking New York, Shanghai and Berlin, Volkswagen today revealed an all-new “people’s car” that picks up on many of the cues of the original Beetle first launched in 1938.

Only the third complete remake in the model’s history, the 2012 Volkswagen Beetle will be displayed at both the New York and Shanghai auto shows, this week, as well as in Germany, where the original model was conceived as a low-cost way to put people on wheels.

The look of the new car returns to the sort of 2-box design that gave the first-generation car such longevity.  The 1998 remake, while clearly influenced by the pre-War design, opted for a semi-circular shape that proved extremely polarizing.

“The new model should be able to help them attract the male buyers that didn’t warm up” to the model soon to go out of production, suggested Dave Sullivan, an automotive analyst with AutoPacific, Inc.

To give it a more macho, sporty feel, VW designers opted for an integrated rear spoiler and bigger wheels.  Dual chromed exhaust tips and a panoramic roof are among the many features offered, some as option, depending on model.

The interior also moves away from the soft, hippie-dippy feel of the prior model.  No more flower vases on the instrument panel.  The sport coupe feel is underscored by a round three-gauge instrument cluster.  But one holder from the outgoing model is the double glovebox.

The 2012 Beetle will offer buyers the choice of three powertrains, including a 170-hp five-cylinder, 2.5-liter gasoline powerplant, a torque, 140-hp 2.0-liter turbodiesel and a 200-hp 2.0-liter gas turbo.  The base engine will offer a 5-speed manual standard or an optional 6-speed automatic, while the turbo powertrains will let buyers choose between a 6-speed stick or 6-speed DSG.

The outgoing Beetle proved initially quite successful – in the U.S., anyway.  It never gained serious traction in Europe, especially Germany, where it was seen as a reminder of the years of struggle after the War.

Notably, the 2012 Volkswagen Beetle will first roll into showrooms in the U.S., starting next September, with the European launch to follow about a month later.  Asian buyers will have to wait until February 2012.

The original Beetle racked up 4.99 million sales before the last one was pulled from the market in Latin America.  The “New” Beetle has logged 477 thousand sales.  It remains to be seen how buyers will react to the retro-futuristic 2012 model, but it certainly is generating a lot of interest.