Will generate more power than 1,000 sedans. 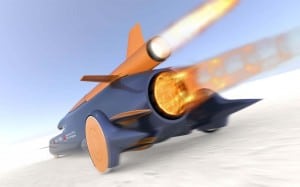 A four-wheeled turducken? The Bloodhound will use a Cosworth F1 engine, a fighter jet engine and a rocket, all to hit 1000 mph.

Few things on the road are faster than a Formula One race car, so it’s probably no surprise that the team developing the Bloodhound turned to Cosworth for help when they laid out plans to set a land speed record of 1000 miles per hour.

But the modified F1 engine the British racing supplier plans to provide is only one piece of the puzzle the Bloodhound team has to solve before setting out to go where no four-wheeled vehicle has ever gone before.  The Cosworth engine won’t even be connected to those specially-designed metal wheels.

Unlike previous record speed setters, the Bloodhound will use two primary sources of propulsion: a 12-foot-long rocket and a jet engine borrowed from the European fighter, the Typhoon.  The Cosworth F1 engine will be needed, it turns out, to pump nearly a metric ton of fuel into the Falcon rocket engine.

With Bloodhound set to make its attempt on the land speed record in late 2012 or early 2013, testing of its propulsion package is about to begin.  Yet there are still a variety of unknowns that the development team, led by long-time speed king Richard Noble, have yet to address – such as what it’s like to pair up both a rocket and a jet engine on a single, wheeled vehicle.

The Falcon is a hybrid rocket, meaning it uses a mix of solid HTPB propellant and liquid oxidizer.  Measuring 12 feet long and 18 inches wide, it produces 27,000 pound-feet of thrust.  The development team likens that to 1,000 conventional passenger cars.

Surprisingly, perhaps, F1 engines produce relatively modest torque, barely 200 lb-ft, though horsepower punches into the 700 range when they’re spinning at peak of around 20,000 RPMs, making the Cosworth a perfect pump – if engineers can solve some sticky problems, like feeding air into the naturally-aspirated V8 at supersonic speeds, and keeping lubricating oil flowing.

Every piece of the Bloodhound will be stressed to the limits, including the wheels, which spin so fast only metal or composites could survive the intense rotational forces.

Once the driver lights all three power sources, the Bloodhound will launch from a standing start to near supersonic speeds in a matter of seconds.  The Falcon engine itself is designed to operate for only 20 seconds.  If all goes according to plan, the Bloodhound will be five miles away from its starting point in just 100 seconds.

“We are creating the ultimate car; we’re going where no-one has gone before,” said Noble, who personally held the land speed record between 1983 and 1997.

The 65-year-old Scotsman handed over the keys and turned to project development with the Thrust SSC, the current record holder.  Driven by British Air Force pilot Andy Green, it was the first wheeled vehicle to go supersonic, averaging 763.035 mph, or Mach 1.02, in 1997.