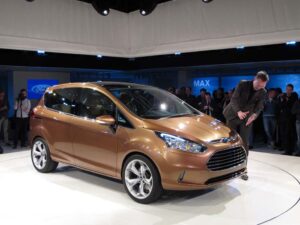 If Ford was hoping to make a splash with its newest microvan, the 2012 B-Max, it couldn’t have lucked into a better time to pull off the covers.

With the Mideast in turmoil and the Libyan crisis, in particular, pushing oil prices back up towards record levels, small cars are poised to become big business.  The question is just how far buyers are willing to downsize.

The new model, officials dubbed a Multi-Purpose Vehicle, or MPV, in Europe, will make its formal debut at the Geneva Motor Show, tomorrow, though Ford gave a handful of media a preview of the 2012 B-Max a day ahead of schedule.

For those unfamiliar with industry logic, the “B-“ refers to the size of the van’s underlying platform.  It also reveals that the Ford B-Max shares its “architecture” with the subcompact Ford Fiesta, which made its return to the U.S. market last year.

But there’s a double-meaning, in that the B-Max doesn’t have the normal B-pillar.  More on that in a moment. 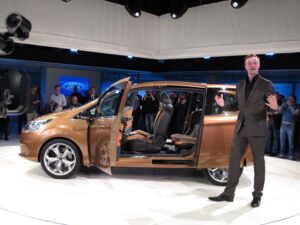 The crossover-like shape makes the B-Max look a fair bit larger than the raw dimensions would suggest.  But the new Ford also has a dynamic feel that would suggest it’s a lot more fun to drive than your typical van.

Like a lot of new minicars, Ford’s product development team opted for a tall seating layout, the better to provide plenty of leg and head room.  But the curvaceous roof, muscular shoulders and swept-back headlamps help designers avoid the ungainly feel of the traditional tall wagon. 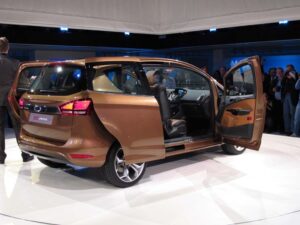 The 2012 Ford B-Max looks a lot larger than the subcompact Fiesta, with which it shares its underlying platform.

One of the more distinctive design elements is actually what’s not included in the 2012 Ford B-Max, the B-pillar that normally would rise between the front and sliding rear doors.  Without that intruding piece of metal occupants can clamber inside with surprising ease, suggests Stefan Lamm, Ford’s senior European designer.

The absence of that pillar might surprise those who’re familiar with ever-tightening safety standards.  But Ford has creatively incorporated the equivalent of a B-pillar into the two doors, which interlock when closed to improve protection in a side crash. 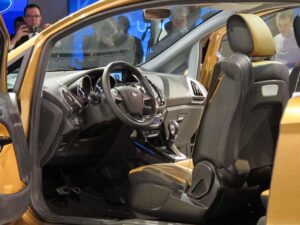 The B-Max interior is notably more lavish than what might normally be found in a B-segment vehicle.

The overall design has a lot in common with the larger and more up-market Ford S-Max, and a look inside the smaller MPV would please those who disdain the typical, downsized econoboxes of decades past.

The 2012 B-Max is powered by a 1.0-liter, 3-cylinder version of the Ford EcoBoost engine.  It also gets Stop/Start technology to automatically shut down at a stop light, then instantly re-start when the driver’s foot lifts off the brake.  That can improve fuel economy by 5% or more, industry officials estimate.

The B-Max will reach European showrooms early in the 2012 calendar-year.  According to Ford officials, the microvan will be limited to Continental markets – for now – though other opportunities are under study. 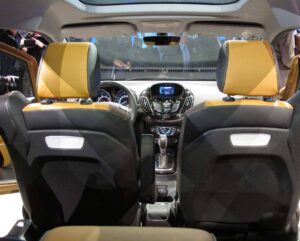 A look inside from the cargo bay.

Unfortunately, the U.S. might not be on the list, cautioned Jim Farley, Ford’s global marketing chief.  “The problem,” he explained, “is how much we’d have to charge.”

Europeans are used to paying more for well-equipped small cars, but Americans still measures a product’s worth by the pound and inch.  With slightly larger microvans, like the Ford C-Max and Mazda5, starting at under $20,000, the B-Max would be pressed to start closer to $15,000 to $16,000 in the States, an equation Ford planners have trouble turning into a viable business case.

But, then again, if the crisis in the Mideast continues to worsen, and fuel prices soar even higher, the industry might have to come up with a new math.