GM will market most vehicles under Chevrolet name in Korea. 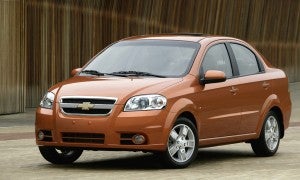 GM Daewoo, best known in this country for producing the Chevrolet Aveo, is being renamed GM Korea. Most of its cars will be marketed as Chevys.

GM Daewoo Auto & Technology Co. – better known as GM Daewoo – announced today that it is replacing the current nameplate with a familiar one, Chevrolet.

All of the company’s new product introductions and refreshes this year will be under the Chevy badge. Additionally, GM Daewoo announced that it will be changing its company name to GM Korea Co., which General Motors said is globally consistent with all other GM country operations. The company name change is expected to be completed by the end of March.

“This important new brand strategy is designed to strengthen our commitment to the Korean market, recognizing it as one of the strongest-performing countries within GM’s global operations. We are well positioned to bring one of the world’s iconic brands to Korea,” said Mike Arcamone, president and CEO of GM Daewoo.  “We cannot afford to sit still, and instead, choose to make a bold move with the launch of Chevrolet in Korea.”

GM said its market research overwhelmingly points to consumer acceptance of the Chevrolet brand in Korea.

This year, the company will begin its most aggressive vehicle launch plan in its history and will have an all-new product lineup with the introduction of eight new models carrying the Chevrolet name. The portfolio includes the Chevrolet Camaro, Chevrolet Orlando, the Chevrolet Aveo global small car, as well as a new SUV and a new premium midsize sedan.

“Not only are we giving Korean consumers more vehicle choices than ever before, but in order to ensure Chevrolet’s long-term success in the (Korean) market, we are totally redesigning our dealerships … and sales networks so that customers will be able to enjoy Chevrolet’s award-winning dealership experience and service,” Arcamone said. “Our main goal is to achieve the highest levels of customer satisfaction and loyalty.”

GM Daewoo’s Board of Directors approved the new name Thursday morning. The current GM Korea will keep its name, GM Korea Ltd., and its focus will remain on the Cadillac brand.

“Our goal is to increase our domestic sales and market share, generate additional revenue, strengthen our relationship with the customers, create new jobs and expand our presence in Korea. We regard these moves as a key to our long-term success and fundamentally believe they will also bring added benefits to our customers and the Korean economy.”

GM Daewoo played a lead role in the design, engineering and manufacturing of the Chevrolet Cruze global compact sedan, the new Chevrolet Spark global mini-car, and the new Chevrolet Aveo global small car. The Aveo will be known as the Sonic in the U.S.

GM Daewoo has five manufacturing facilities in Korea and an assembly plant in Vietnam.

The Detroit News reported that a few vehicles, including the Alpheon, a large sedan, will not be sold under the Chevrolet brand, said Lim Young-mi, a GM Daewoo spokeswoman, but she didn’t see how the vehicle would be marketed.

Unlisted GM Daewoo was created after Detroit-based GM acquired Daewoo Motor Co., the automobile unit of the Daewoo Group resulting from its collapse in 1997-98.

A few vehicles, including the Alpheon, a large-size sedan, will not be sold under the Chevrolet brand, said Lim Young-mi, a GM Daewoo spokeswoman.

Unlisted GM Daewoo was created after Detroit-based GM acquired Daewoo Motor Co., the automobile unit of the Daewoo Group. That conglomerate had collapsed as a result of the financial implosion that hit South Korea in 1997-98, part of the broader Asian economic crisis.