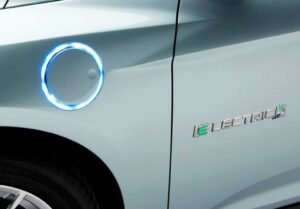 A close-up of the 2012 Ford Focus Electric reveals the battery charging port on the front fender.

Hoping to get potential buyers to plug into the upcoming launch of its new Focus Electric, Ford is offering this little tease of its new battery car, which first popped up on its Facebook site.

The Focus Electric will actually be the second battery-electric vehicle, or BEV, in the Ford line-up, following months behind the launch of the Transit Connect Electric, a battery-powered version of the maker’s compact commercial van.  All told, the Detroit maker plans to roll out five BEVs and plug-in hybrids over the next several years.

While the 2012 Ford Focus Electric will make an appearance at the upcoming Detroit Auto Show, it will actually debut several days earlier at the annual Consumer Electronics Show, in Las Vegas.  Ford has been a major player at CES and, yet again, CEO Alan Mulally will serve as keynote speaker, for the third time since he joined the automaker in 2006.

Ford is keeping details of the Focus Electric under wraps until Friday morning, but it has provided a few clues in recent months.  The compact model will reply on a lithium-ion battery pack expected to yield somewhere in the range of 100 miles per charge – though the exact figure could be 20% less using revised federal testing procedures (as Nissan learned when it launched the new Leaf).

At least initially, Ford has said it plans to offer the Focus Electric in only 14 states and the District of Columbia, reflecting such factors as the availability of a charging infrastructure – and climate conditions.  Battery car range can be reduced by as much as half in extremely cold weather, in large part due to the demands of onboard electric heaters.

How many battery cars Ford hopes to sell hasn’t been revealed though, like its competitors, the maker is taking a cautious, in not outright skeptical, view of the market.  Part of the strategy is to use outside partners to help handle development of the company’s initial battery vehicles, according to Sherif Marakby, who oversees Ford’s electrification program.

At last month’s launch of the Transit Connect Electric, Marakby noted Ford has only five full-time employees dedicated to that program, relying primarily on Canadian-based Azure Dynamics to oversee vehicle development, and AM General to handle the battery van’s production.

The batteries, meanwhile, are being produced by LG Chem, the same Korean firm that provides lithium-ion technology for the Chevrolet Volt – though they are reportedly using different version of the chemistry for each of the vehicles.

TheDetroitBureau.com will have more on the Ford Focus Electric on Friday.  Meanwhile, you can plug into a special, ongoing feed from Ford by Clicking Here.