Denise McCluggage and the color of our cars. 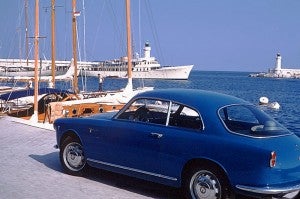 Think blue and you'll see quite a few cars with the hue of the Alfa columnist Denise McCluggage used to drive.

When you next go out on the street that’s what you’re going to see. Blue. Bright blue cars and pick-up trucks. (I do like a blue truck.) You are going to see them because I started noticing more of that particular blue – not navy, not baby, but blue like mouthwash is blue; blue like my Alfa Giulietta that I tossed around Europe circa 1958 was blue.

And because I saw them you will. Suggestion does that. (See one car with a failed taillight and suddenly it seems every third car you pull up behind has a taillight out.)

For all my “there’s one, there’s another” observation, blue is not a new favorite car color. Indeed only in Japan is blue, any blue, in the top four of popularity. TheDetroitBureau.com recently reported on DuPont’s announcement of car color favorites worldwide (Click Here for more). Notice please that the four favored car colors around the globe are non-colors. In varied order in varying countries black, white, silver and gray are continued favorites. Red, the most favored colorful color, most often leads my blue. (But zap – see blue for the nonce.) 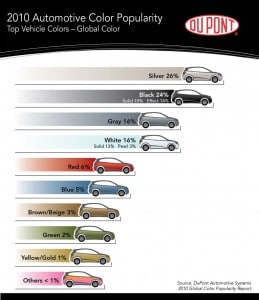 The most popular automotive paint colors of the year, according to DuPont.

When I see blue I see the old blue Oldsmobile that was my family’s car for miles mounting into the 300,000 range as I recall. (Those Rocket engines were indestructible.) This car had begun life in the then popular three-tone mode – blue, darker blue and lighter blue. In my memory of it a relentless Kansas sun and much exposure and a move to the salty mist of California’s Bay Area had chalked the car to a generally mottled pale blueness. As if seen through a dusty window.

Automobile paint was primitive stuff in the mid-century and blue was maybe the least stable. A graphics artist told me the word used in his field to describe some blue colors: ”fugitive.” How fancifully descriptive. That car’s paint was as long-time fugitive as someone pictured in a curled post office wanted poster.

I don’t remember choosing the blue of my Alfa. That’s sort of how it came. That’s what chose the color of many cars I owned – chance – and quite a few turned up red, probably not a choice I would have made. High visibility is not my favorite characteristic in a car, but my Jaguar XK 140 was red. As least two Fiats were red. My 1960s Mini Cooper. My Subaru BRAT.

Another non-choice color but one I liked was the wet river stone color of my Porsche.  I hadn’t even intended to buy a car but I was at the factory and they had this car just back from a regional show. It was a 1959 356 with an electric sunroof (!) and knock-off hubs on the wheels. That’s why they wanted me to buy it because knock-offs were illegal in Germany so it had to leave home. It cost $3000. I had exactly $3000 so I emptied my bank account and bought the car. Who wouldn’t?

The colors I selected tended to be the non-color colors that are universally popular today. A grey Lancia, a white Fiat, a beige Land Rover (which, however, I immediately had painted — for $135 — an authentic school-bus yellow. My Mini Moke was tan/beige/cream but there wasn’t much area to show color. My Colt Vista white; my 2-door Sidekick white. I did drive a blue Mitsubishi for a year but it wasn’t really mine.

I have never owned a green car though I had a friend, a mechanic and driver of midget race cars, who had a darkish green Mercury when a Mercury was hot-shoe preferred. He swore that cops literally could not see green cars. The color failed to register on their retinas or something. I must say I never knew him to drive slowly and yet he never got a ticket. That was one green car I rather liked. Another was a Hornet – yes, a green hornet. Bob Said (the characterful father of racing’s current Boris Said) showed up one day in my then Vermont driveway in a green Hornet, but it was a glowing exotic-bug green and I think would probably register on any retina. What I really liked about it was the one-inch letters on the door: “Driver: Cato.”

If these Hornet references are meaningless to you then your driver’s license is probably newer than most of the items in my freezer. I point you to Google.

I usually advise people, when they ask, to choose a car color based on climate and visibility. In sunny climes air conditioners take more energy and more time to cool a dark car than a light one. In any parking lot on a sunny day put one flat hand on a white car and the other on a dark car. See how quickly that “other” hand pops off the surface.

As for safety there really is something to that invisibility of a dark green car – that’s the affective color of most asphalt highways, particularly those in deep shade on an otherwise bright day. Daytime running lights aid being seen but those two bright holes are all that’s visible to drivers coming at you out of squnt-inducing sun into leafy darkness.

In twilight, in dust and fog, in rain, sleet or snow your car is visible to others depending on brightness, reflectance and contrast. White and light hues reflect more light and stand out against dark backgrounds. Dark car colors melt into the road as daylight recedes. Much of nature is green and brown so red you might think scores with high contrast. but red seems to register on the eye oddly. Witness the move several decades ago from red fire trucks to chartreuse and other yellowish greens.

The problem is that many cars just don’t look their best in white. Many resemble a nurse’s shoe. And I must admit I do admire almost any car in shining spotless black, a dark dark blue, a deep deep red or nearly-black green. Even small cars, since lack of mass no longer means lack of luxury, are increasingly popular is dark colors. But increasingly hard to keep looking sharp without constant dusting and polishing. (Take on an intern with a soft rag.) And, again, dark cars are hard to see in low-light situations. Keep in mind that the first things many cops arriving on the scene of an accident hear is “I didn’t see him.”

I read somewhere that the most visible car would be one with say one bright pink fender, another in chrome yellow, a polka dot or striped hood and contrasting top, with different yet door panels and trunk deck. Wiggly lines and vibrating colors. Certainly easy to see you in a car like that. But the question looms: would you want to be seen in a car like that?

Choose the color you’ve always wanted, that matches your eyes, that your first love drove. Whatever. Just be ready for the consequences of extra heat or near invisibility in twilight.

Crikey, can’t believe I forgot. My Ferrari 250 GT, the one in which I won the GT category at Sebring in 1961 was blue. Twice. First dark navy blue as it came to me. Then after Allen Eager popped it out of the Karussell onto a fence at the ‘Ring Scaglietti repaired it and it emerged an electric blue – so blue it was red – with a white racing stripe down the middle.

And look for the launch of DeniseMcCluggage.com on December 18th!