The 5.0 is back and the original pony car has never been more fun. 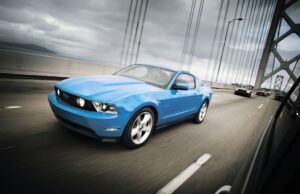 The 2011 Ford Mustang GT in Grabber Blue turns a lot of heads.

The number 5.0 holds a hallowed place in Ford lore. For more 25 years, Ford’s 5.0-liter V-8 powered everything from Thunderbirds to F-150 pickups to Broncos. But most notably, they powered Mustangs.

Now, after 16 years in exile, the 5.0 is back. Ford retired the old 5.0, also known as the 302 for its displacement in cubic inches, in 1995, replacing its venerable V-8 with the decent 4.6-liter. But while the 4.6 did a decent job, it didn’t have that beloved number attached to its valvecovers.

Don’t think for a moment that Ford’s decision to bring back the 5.0 isn’t partly driven by nostalgia. Automakers decide how big a new engine design will be based on a lot of factors such as the power characteristics it needs, fuel economy and smoothness. But they also make decisions based on what the marketers say will help sell cars.

With this new engine, there was one other important consideration: It had to produce horsepower comparable to the 6.2-liter V-8 in the Chevrolet Camaro SS. 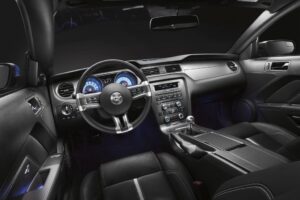 Some parts of the Mustang interior are very cool, but the seats do not have enough support for a sports car.

On that count, the Mustang can now stand up to the Camaro. With 412 horsepower, the lighter and smaller Mustang is now just 14 ponies short. But at 3,653 pounds, the Mustang is about 200 pounds lighter than a comparable Camaro, so it has a better power-to-weight ratio. Pull up next to a Camaro and the winner of a stoplight drag race will likely be the one who gets the best jump out of the hole. Both should return 0-60 times in the mid 4-second range. 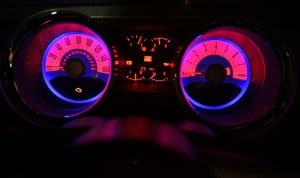 While it does revert to the 5.0-liter displacement, the new engine actually has more common with the 4.6 than the original 5.0. Instead of the old 5.0’s overhead-valve design, the new one has overhead cams. While the 4.6 had one cam per cylinder bank, there are two cams per bank in the new engine. There are also 32 valves, or 4 per cylinder, compared to the 4.6’s three valves.

It’s also worth noting that the 5.0 is beautifully styled. Many automakers have resorted to a simple plastic cover to hide what are essentially fairly mundane-looking engines. Not the Mustang engine. Wide magnesium valve covers proudly proclaim “Powered by Ford.” The intake runners make curvaceous arches inside the Vee. It’s too bad they cover it up with a hood.

Unlike many modern engines, the new 5.0 in the Mustang is beautifully styled.

More important than the lusty V-8 is Ford also gave the base car an upgrade as well. Finally gone is the ancient 4.0-liter V-6, an engine better suited to powering tractors than sports cars. The new 3.7-liter V-6 pumps out 305 horsepower, which is on par with the 3.6-liter V-6 in the Camaro. Don’t think the automotive product planners benchmark the competition? With these two, it’s patently obvious.

Ford’s new V-8 has a lusty growl like it’s predecessor, but deeper. It sounds nastier, angrier than the old engine. And it is. It’s also powerful enough that keeping your foot planted on the go pedal for very long is a little unnerving as the car rockets forward. Because its smaller, it feels faster than the Camaro.

Ford updated the Mustang for 2010, but the new engines weren’t ready, so it soldiered on with old ones for another year. The Mustang’s last major redesign was in 2005. 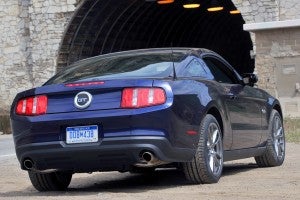 The Mustang features a solid rear axle, while every one of its competitors features an independent rear suspension.

The automaker made one critical decision early on with the development of that 2005 Mustang: It would continue with the solid rear axle, a decision that reduces costs by about $1,500 per vehicle, but costs the car some degree of handling prowess. It was a crucial decision because every car the Mustang competes with – including the Camaro and Dodge Challenger – have independent setups in back.

Ford has done a ton of work massaging the suspension to get the most out of the less expensive design. But there’s just no getting around the fact that the Mustang’s rear wheels are connected by a stiff metal tube.

It shows in quick launches from traffic lights when unseemly axle hop sometimes limits the car’s ability to put power to the pavement and in lumpy corners when the rear end wants to step out under power.

The Mustang is great fun to drive, but somewhat juvenile in feel.

The six-speed manual is a delight to shift and the transmission makes quality mechanical noises. The clutch is light and takeup is smooth.

Inside, there are a few issues. The cupholders are immediately behind the gearshift, so they get in the way if there is anything in them. The steering wheel adjusts for rake, but not reach. The seatback adjusts in steps, so it might not let you set it at just the right angle.

But the biggest demerits inside are the severely underbolstered front seats. The right side of the driver’s seat is OK because you can brace yourself against the center console, but the left side tends to give up on any thoughts of keeping its occupant in place.

What is cool is Ford’s changeable instrument panel lighting scheme. Also nice is cool blue ambient lighting in the footwells and center console.

As one might expect, the back seat is rather tight, but it is tolerable for a smaller person. This is one area where the Camaro and Challenger trump the Mustang.Their notchback shapes provide more headroom than the fastback Mustang.

While the Mustang shape has become familiar, it still draws stares, especially when painted in the appropriate named Grabber Blue. The grey-painted forged aluminum wheels are really cool.

A surprising demerit for the Mustang is fuel tank size. At just 16 gallons, the low-fuel light came on after just 231 miles. The Camaro’s tank holds 19 gallons. While it’s rated at 17 mpg city and 26 mpg highway, we saw 18 mpg in mostly freeway miles, which would indicate that there was still more than 3 gallons of fuel in the tank.

Mustang owners no longer have to play second fiddle to the great engines under the hoods of their crosstown rivals from Chevy. The original pony car now has power to stand toe to toe with the Camaro.