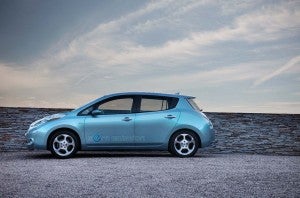 Struggling to find a way to overcome the so-called “range anxiety” about electric vehicles,  TheDetroitBureau.com has learned that Nissan is preparing a program that, if brought to market, would give Leaf buyers a longer-range alternative – at least for one week a year – by providing them with a no-cost loan of a conventionally-powered vehicle that could be used, for example, for a longer vacation than possible with the 100-mile range of the Leaf.

Imagine cutting your energy costs by 80% or more.  That and the premise of helping the environment will be two of the key selling points when the new wave of battery-electric vehicles, such as Leaf, starts reaching market later this year.

The downside is that pure battery-electric vehicles, like the 2011 Leaf, have relative modest range and long charging times, limiting their capabilities in the eyes of most potential buyers.  It could be a critical weakness of the battery market, analysts warn — and something competitors will try to benefit from.

General Motors, for example, plans to use Leaf’s limitations to help promote its new Chevrolet Volt plug-in. The Chevy model will only get about 40 miles per charge, but will then be able to switch to gasoline power for longer trips.

The idea of offering a rental car when longer range is needed, a well-placed, high-ranking Nissan source tells TheDetroitBureau.com, is “part of an overall study looking at to best finance and sell the Leaf.”

For the moment, the focus is on the British market, but the Japanese maker may very well adopt the idea for the States, where range anxiety is an even more serious concern.

Under the proposal being studied, a Leaf buyer would get a car rental package that would cover, say, the use of an Xterra SUV or Altima sedan for a week.  It is unclear whether the rental would be handled through a participating Nissan dealer or through an independent rent-a-car company.

Nissan has been aggressive in looking for ways to package and sell the anticipated flood of battery-electric vehicles CEO Carlos Ghosn wants to bring to market over the coming years.  That will start with the launch of the Leaf, late this year, but expand to a variety of other offerings in the years to come, including models sold by the maker’s Infiniti luxury brand, as well as by its French alliance partner, Renault – which is also run by Ghosn.

Nissan has negotiated a variety of deals to enhance the appeal – and functionality — of such products in various markets.  In the U.S., for example, it is working with energy partners to provide low-price power for Leaf customers who charge up overnight.  In Israel, it has come up with an unusual plan to swap out discharged batteries and replace them with fresh ones.

“Bottom line,” says the source at the Japanese maker, “we have to sell EVs in a very different way to an internal combustion engine vehicle, and that means creating some unique conditions around the ownership experience.”

A decision on the rent-a-car proposal could be made in the next few months.