Aiming for a “greater range of drivers.” 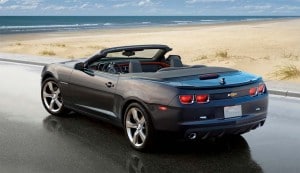 Chevy will finally get its Camaro Convertible to market by next February.

After a delay of more than a year, the Chevrolet Camaro Convertible is finally making it to market – although some might question the timing of a February launch for the ragtop muscle car.

Then again, Chevy will put the focus on the Sunbelt first, revealing a production version of the Camaro Convertible at next month’s Los Angeles Motor Show.

But Chevrolet officials have jumped the gun, at least on pricing, revealing that the convertible pony car will carry a base price of $30,000 plus another $850 for destination and delivery.  That adds up to about a $7,000 premium over the Camaro coupe.

By the time the convertible hits the road the reborn Camaro will have been on sale for nearly two years.  It’s a matter of debate whether that’s unfortunate or fortuitous timing.

As TheDetroitBureau.com first revealed last year, the original plans for a new Camaro Convertible were dashed by the bankruptcy of the ragtop roof’s supplier.  That forced Chevy to find a replacement and make some design tweaks to accommodate the switch.

The good news is that the convertible now will arrive at a point in the life of a typical coupe when demand begins to soften – it’s a segment where new is always better, so a significant update like this could help revive interest.

“The Convertible will make the all-new Camaro, already a smash-hit, even more desirable to a greater range of drivers,” insists Chris Perry, vice president of Chevrolet Marketing.

While Chevy is saving specific details for the L.A. reveal, it appears the maker will offer a convertible version of both the base car, with its 3.6-liter V6, and the more powerful V8 Camaro.  Both 6-speed stick and 6-speed automatic gearboxes will be available on the ragtop as well as the coupe.

If there’s a challenge facing the Camaro Convertible it’s price.  It appears that the open-air muscle car will come in about $2,000 more than comparable versions of the Ford Mustang Convertible.  A price premium hasn’t hurt the sales performance of the Camaro coupe, however, and that seems why Chevy is willing to risk going to market with a premium price tag for the new model.