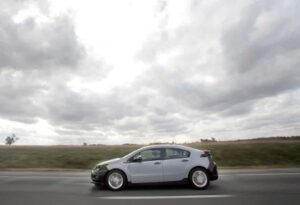 Not quite coast-to-coast. The 2011 Chevrolet Volt launch will kick off with a 1,766-mile drive from Austin to Detroit, while seven states will now be part of the E-REV's launch.

General Motors expects to produce only about 10,000 of its Chevrolet Volt plug-in hybrids by the end of 2011, as it ramps up operations, expands distribution and trains dealers and service technicians, but the maker says it will triple output to 30,000 of the so-called Extended-Range Electric Vehicles, or E-REVs, in 2012.

General Motors CEO Ed Whitacre returned to his home state of Texas, today, to kick off the start of the Volt “Freedom Drive,” a 1,766-mile demonstration trip that will take a Chevy Volt from Austin to New York City.  Those two cities anchor two other regions of the country that GM has decided to add to its list of launch sites when Volt makes its formal entrance into the retail market in November.

In all, the automaker plans to start with sales in six states – New York, New Jersey, Connecticut, California, Michigan and Texas – and Washington, D.C.  Confirming an earlier report in TheDetroitBureau.com, GM officials also confirmed that a full roll-out of the Volt to all 50 states and Canada could take a little longer than originally planned.

The current goal is to complete that process “within 12 to 18 months,” which could push the end date back into 2012, acknowledged Doug Wernert, the Chevrolet VoltAge Community Manager.

In one sense, the low numbers available for the first year of production could be used by GM to project an optimistic picture of Volt’s acceptance into the market – something that industry analysts have been furiously debating, notably because of the anticipated price tag of around $40,000 before a $7,500 federal tax credit.

But Wernert stressed the challenges of making the Chevy Volt available aren’t limited to the assembly line, where some all-new production methods will be required.

There’s also the issue of setting up an infrastructure.  The automaker will try to encourage buyers to opt for a 240-volt charging system that can reduce recharge times from 10 hours, at 120V, to just four.

There’s also the challenge of bringing dealers up to speed.  Retailers will be required to take special training programs, and have both sales and service personnel equipped to deal with the distinctive features of the E-REV.  There will need to be “a couple of 240-volt chargers in the store,” stressed Wernert, as well as a demonstrator car.

That could particular important if demand for the Volt lives up to GM’s own expectations – which would likely mean a waiting list at most showrooms, at least during the first year or so of production.

In other news, Wernert revealed that buyers will get “multiple years of OnStar” as a standard feature when buying a new Chevrolet Volt.  That telematics-based service will not only offer its conventional safety-and-security services, but also add a special feature permitting owners to track and control various vehicle features, including battery charging, from an iPhone or other smartphone.

Unlike a conventional hybrid, Volt will carry enough lithium-ion batteries to travel an estimated 40 miles per charge – though aggressive driving, along with extensive use of air conditioning, heat or headlights will lower that number.  In contrast to pure battery-electric vehicles, such as the new Nissan Leaf, Volt will also carry a small internal combustion engine, so it will be able to keep driving once the batteries discharge.  GM anticipates about 310 miles range on gasoline power between fill-ups.

Meanwhile, unlike some plug-in hybrids, such as the advanced Toyota Prius Plug-in, that gasoline engine will not be able to drive Volt’s wheels directly.  The I-4 powertrain will serve only as a generator, sending power to Volt’s electric motors.