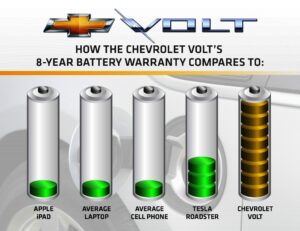 A 2007 concept car is about to become production reality.

The Chevrolet Volt electric vehicle will come with a standard, eight-year/100,000-mile warranty on its lithium-ion battery pack when it goes on sale late this year – the best in the business thus far.

At current prices, the cost of a Volt battery pack is about $16,000, or the price of a new compact car, so the GM announcement is potentially significant – at least for the first owner of the car. (See Driving the Chevrolet Cruze)

The replacement cost of electric vehicle batteries is one of many concerns that have thus far kept EVs as mere low volume curiosities instead of the mainstream vehicles that proponents maintain they should become.

Nissan’s electric Leaf is also due to go on sale this December in Europe, Japan and the U.S. on a limited basis. Nissan has not yet released warranty details, but unlike GM, it has released Leaf pricing. Including the maximum $7,500 federal tax credit for which the Leaf is eligible, the consumer’s after-tax net cost of a Leaf could be as low as $25,280. The Manufacturer’s Suggested Retail Price is $32,780. Leaf leasing begins at $349 per month.

It has been widely speculated in the media that GM will ask $40,000 for a Volt, before taxpayer subsidies. However, that was before GM returned to profitability and started becoming more aggressive in its marketing.

GM also appears to be on a similar production ramp up plan as Nissan – with 2012 being the big year for both companies,  who will by then be in mass production with  EVs and in a global fight for potential customers.

GM claims, with evident justification, that this is the automotive industry’s longest, most comprehensive battery warranty for an electric vehicle. Like other GM warranties, it is transferable at no cost to subsequent vehicle owners.

Recently a former Hyundai marketing executive joined GM after a brief stint at Nissan where he was working on the Leaf intro. Hyundai — 11 years ago — developed what is arguably the best extended-warranty in the business – 10 years/100,000 miles, with the exception of Volvo’s, which is more comprehensive and includes maintenance, but for shorter periods. (See Cadillac Matches BMW on Free Maintenance ) It’s possible that the Hyundai experience is now influencing GM marketing.

Taxpayers are providing massive subsidies to help overcome the objections of potential buyers for what are now and for the foreseeable future high cost, limited range electric vehicles, including, as mentioned, tax credits of $7,500 per vehicle to purchasers, as well a variety of subsidized infrastructure changes. (See Taxpayers to Subsidize EVs and Charging Stations)

The Volt’s comprehensive battery warranty covers all 161 battery components, 95% of which are designed and engineered by GM, in addition to the thermal management system, charging system and electric drive components.

GM also claims the Volt is the only electric vehicle that can operate under a full range of climates and driving conditions without limitations or concern about being stranded by a depleted battery. It has a range of about 340 miles – powered with electricity at all times. These claims await verification by our independent testing program.

For up to the first 40 miles – about the range of your gasoline car when its fuel gauge is on empty – the Volt is powered by electricity stored in its 16-kWh lithium-ion battery, using no fuel and therefore producing no emissions — if you do not take into account how the energy is generated to recharge the batteries. (Half of U.S. electricity is produced by coal, a serious Green House gas emitter.)

When the Volt’s lithium-ion battery runs low, an engine/generator extends the driving range another 300 miles on a full tank of fuel. Think of it as an updated and larger  EV1 with its own on-board recharging system

GM claims that the Volt is the only mass-market electric vehicle with a battery that can be warmed or cooled. The battery is designed to provide reliable operation, when plugged in, at temperatures as low as -13 degrees Fahrenheit (-25 C) and as high as 122 degrees Fahrenheit (+50 C). In cold weather, the battery will be preheated during charging to provide full power capability.

In hot weather – the most challenging environment for a battery – the Volt’s battery can be chilled during charging. The Volt’s liquid thermal management system can also be powered during driving by the battery or engine/generator.

GM engineers have completed more than 1 million miles and 4 million hours of validation testing of Volt battery packs since 2007, as well as each pack’s nine modules and 288 cells. The development, validation and test teams have met thousands of specifications and validated each of the Volt battery’s components.

“We’re moving fast to deliver for the customer and ensure the Volt launch stays on track,” said Nancy Laubenthal, plant manager of the Brownstown Battery Plant. “Last August we announced the investment in the Brownstown facility and in January built our first completed battery pack. Now we are finishing pre-production batteries and soon we will begin building production batteries for Chevrolet Volts that will be delivered to dealers before the end of the year.”

Last year, the U.S. Department of Energy selected 45 companies, universities and organizations in 28 states – including GM’s Brownstown plant – to share more than $2 billion in taxpayer-financed awards for electric drive and battery manufacturing, and transportation electrification. Nearly half of the awards are designated for cell, battery and materials manufacturing facilities in Michigan, a key state in President Obama’s election, and a crucial one in the upcoming midterm Congressional elections.

President Obama will be campaigning in Western Michigan tomorrow at Korea- owned  LG Chem’s battery plant that will begin supplying lithium-ion packs to the 2011 Chevrolet Volt and  for Ford’s upcoming Focus Electric model.