Volt’s Nationwide Rollout Could Stretch Into 2012 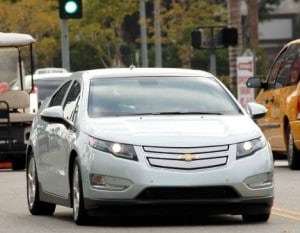 Barring some unexpected delay, General Motors hopes to ship its first extended-range electric vehicle, the Chevrolet Volt, to dealers in a handful of key markets by November, but expanding availability to the rest of the country could take longer than expected, company officials warn.

Some potential buyers might not have access to a Volt until well into 2012 due to production challenges, dealer issues – and the challenge of making sure there’s a community infrastructure capable of supporting the Volt, which GM prefers to call an E-REV, rather than a plug-in hybrid.

“The Volt is still on schedule” for a November 2010 retail launch, the program’s manager, Tony Posawatz, tells GM-Volt.com.

The complex vehicle, which blends a battery drive system with a gasoline-powered generator, will see a slow ramp up in production to ensure that both GM and its suppliers get things right.  That means that the 2011 Chevy Volt will initially be offered in just three regions: California, Michigan and metro Washington, D.C. 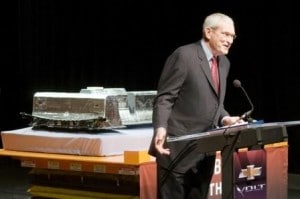 The goal is to then expand distribution across both the U.S. and Canada in relatively short order, and Posawatz hopes to see that happen “by the end of 2011.”

But that may not be possible, GM spokesman Rob Peterson cautions.  In a conversation with TheDetroitBureau.com, he explains there are a number of potential obstacles that could delay the “very measured” North American roll-out.

Production capability is top of his list.  While GM has a reasonable amount of experience building conventional gasoline-electric models, like the Cadillac Escalade Hybrid, the Volt is a significantly more complicated piece of hardware.  And, as a halo model for the entire corporation, GM wants to ensure that it doesn’t run into any brand-tarnishing quality snafus.

That extends to the dealer base, with retailers needing to make sure they have service technicians trained and ready to deal with the Volt.  That could delay the E-REV’s introduction in some markets. 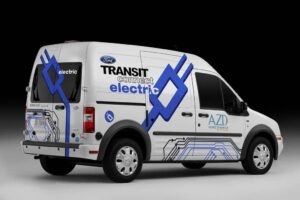 A number of makers plan to launch battery-based vehicles over the next few years, including Ford, which will start with the Transit Connect Electric.

The initial markets targeted by GM have “willing partners on the municipal side,” notes Peterson.  That can involve revising zoning laws to permit a Volt owner to set up a high-voltage charger, or setting up public charging stations.  Utilities also must play a role in establishing this infrastructure.

“We’ve got a lot of work to do to get where we need to be,” stresses Peterson, who says “it might not be possible” to complete the Volt’s nationwide rollout until sometime in 2012.

GM isn’t the only maker moving into advanced vehicle electrification.  About the same time the 2011 Chevrolet Volt debuts, Nissan will launch its pure battery-electric vehicle, or BEV, the 2011 Leaf.  And Toyota will come to market with a plug-in hybrid version of the Prius, it hopes, by the end of this year.

Meanwhile, Ford Motor Co. is readying an assortment of plug-ins and BEVs, the first of which, the Transit Connect Electric, is also scheduled to reach market by the end of 2010.

All these makers plan phased rollouts that will initially emphasize markets with strong potential demand for battery-based vehicles – and which have available infrastructures to support the technology.