Department of Energy project will install 15,000 240-volt outlets, many of them in private homes. U.S. workers to pay. 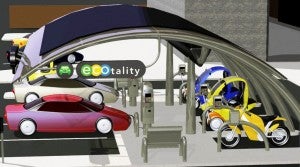 A company called Ecotality has received another $15 million from the Department of Energy to provide free home chargers to the purchasers of Chevrolet Volt and Nissan Leaf electric vehicles, a $1,000 to $2,000 saving courtesy of U.S. workers.

This new Federal grant extension includes $15 million of American Recovery and Reinvestment Act (ARRA) funding, which will be matched with $15 million in private funds, for a total of $30 million.

ARRA, in case you forgot, was an almost $1 trillion dollar bill – in both legislative and cost senses – by the new Obama Administration that used borrowed money to stimulate the U.S. economy. This was after the outgoing Bush Administration allowed the collapse of Lehman Brothers in the fall of 2008 and the financial markets imploded. Whether it actually stimulated the economy or just stopped a further contraction or was just more pork for special interests is still a matter of debate.

These new federal funds to Ecotality are in addition to the original grant of almost $100 million to Ecoality’s EV Project in October of 1999, which was created through ARRA.

The additional taxpayer largesse comes as the House of Lords in the United Kingdom is due to debate next week controversial electric vehicle subsidies of up to $7,400 per car and $44 million for charging stations in London and other urban areas. Similar and just as expensive giveaways are under consideration by governments globally.

The conversion of automobility to electric vehicles will require these taxpayer subsidies, according to proponents. Critics counter that this is shaping up to be a massive raid on public coffers by special interests under the guise of cleaner air.

The debate has taken on new political urgency as the Global Great Recession drags on and governments continue to run huge, unsustainable deficits, and financial reforms over the practices that started this mess are stalled by corporate lobbyists.

With this expansion, Ecotality’s EV Project, already the largest electric vehicle infrastructure project ever undertaken, will provide an additional 2,600 home chargers for owners of the Chevrolet Volt, as well as another 1,000 chargers for the zero-emission Nissan LEAF electric vehicles. In the U.S., the EV Project will now deliver nearly 15,000 residential and commercial chargers to 13 cities in five states and the District of Columbia.

On a stand alone basis nether the Nissan Leaf nor the Chevrolet Volt can compete on a direct ownership cost and operating basis when compared to other vehicles from their makers, say the Nissan Versa, or the upcoming Chevrolet Cruze – both high mileage, low cost vehicles that burn gasoline.

However, that’s the problem counter EV proponents. Some way has to be found to move  beyond petroleum, a phrase that has increasing resonance as the Deepwater Horizon spill continues to spew oil into the Gulf of Mexico in what is the largest environmental disaster in U.S. history.

The only apparent defender of British Petroleum, responsible for the ongoing Deepwater disaster, is the Republican party in the U.S.

Representative Joe Barton (R-Texas) – the leading Republican on the House Energy and Commerce Committee – said earlier this week that President Obama’s insistence that BP establish a $20 billion escrow fund to help pay for the growing ecological and economic damages from the Gulf of Mexico Oil spill was a “shakedown” and that —  are you sitting down – the U.S. Congress owed British Petroleum an apology.

Barton has received more than $1 million in campaign contributions from the oil and gas industries.