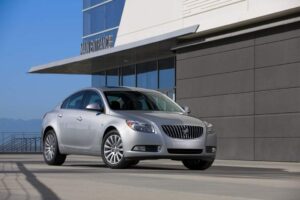 Once written off for dead, the launch of the 2011 Buick Regal could continue rebuilding the brand's momentum.

There were plenty of surprises when General Motors made it through bankruptcy, last year, including not only the demise of the Pontiac, Saturn, Hummer and Saab divisions – but the decision to keep Buick.

Founded in 1899 as the Buick Auto-Vim and Power Company, it was sold, in 1903, by David Dunbar Buick and his partners to the company that would become GM.  Today the oldest surviving Amerian auto brand, the once-powerful Buick is but a shadow of its former self, sales plunging 90% over the last two decades.

Yet there have been recent signs of life, new products such as the Enclave crossover and LaCrosse sedan not only surging in sales but bringing in the sort of young, affluent buyers who long steered clear of the stodgy old marque.  Could Buick be hip again?  The real test is likely to come with the launch of the 2011 Buick Regal.

Ironically, the new midsize sedan wasn’t originally supposed to be a Buick.  What’s now badged Regal was originally a joint development pairing GM’s European brand, Opel, and North America’s Saturn.  When the latter division was abandoned by GM, the sedan got a new nameplate and grille, much to Buick’s good fortune.

While the American sedan is just getting ready to roll into showrooms, the European version has been on sale for the better part of a year under the Opel Insignia badge, and has been winning rave reviews and plenty of new buyers.  If our first long drive of the 2011 Buick Regal is any indication, the same thing may soon happen here. 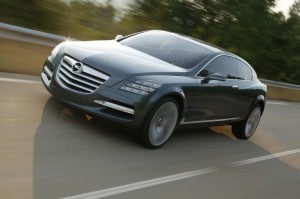 The 2011 Buick Regal has plenty in common with the European Opel Insignia.

Like LaCrosse, the coupe-like styling of the new Regal is likely to take many midsize buyers by surprise.  It’s definitely not the stodgy Buick look that we’d grown familiar with in recent decades, but a handsome and, dare we say it, even hip, shape that is meant to position the brand as a styling trend-setter as it was in its earlier years.

(Buick is taking a look at several possible halo cars, along with other new models now in the works. Click Here for more.)

The overall look is very European, with swept-back headlamps and a tip-to-tail character line.  The curvaceous shape fits Buick surprisingly well, even though the design was originally intended to be a Saturn.  The most notable update when the sedan was rebadged was to give the 2011 Regal the classic Buick waterfall grille. It also gets 18-inch wheels as standard equipment, with 19s optional on the base car and 20s available on the Regal Turbo.

The impression is one of a car playing in a class above the typical midsize models, whether they be a Chevrolet Malibu or Toyota Camry.  That’s all the more critical considering Buick is aiming Regal to compete with the likes of the Lexus ES sedan.

One of the most notable improvements in GM products, as a whole, in recent times, has been the switch to more well-appointed and executed interiors.  That was desperately needed by Buick, a brand with near-luxury aspirations but, until recently, the sort of cheap and tinny cabins that even the Koreans have moved away from.

So the evolution from old Regal to new is especially apparent when you slip inside the generally spacious interior.  With the exception of a small, overhead console that’s a bit cheap looking, Buick has blessed the new 2011 Regal with some great details and plenty of upscale materials.  The center stack is, at least at first, a bit overwhelming, but quickly becomes easy and intuitive to operate, with a large and useful (optional) navigation screen anchoring the package. 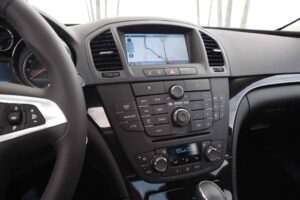 Some much-needed improvements have been made to the interior of the 2011 Buick Regl.

The 2011 Buick Regal’s seating is comfortable but without that over-stuffed living room feel of Buick’s past.  The rear is a bit cramped for headroom, reflecting the realities of a coupe-like curve to the roofline.

If the styling of past Buick’s showed the brand’s age, the ride of prior models, including the last-generation Regal, was equally dated.  So, we admit being skeptical when we found that the maker was inviting us to spend a day driving through the mountains and valleys outside San Diego, going from oceanfront to high plains, and whipping through some of the most challenging public roads in the country.

As we came to realize, there was reason for this confidence, the 2011 Regal proving itself both solidly planted and responsive.  The base car’s suspension isn’t quite as aggressive as the one under Insignia’s skin.  It’s a MacPherson strut front and multilink rear, with slightly softer bushings and the rollbar reduced in diameter by 0.04 inches. Nonetheless, it handled the route with aplomb.

If we could wish for anything to change, it would be the hydraulic power steering unit.  It’s plenty adequate but not nearly as fun to drive as the variable assist unit on the Regal Turbo.  The good news, project chief Jim Federico revealed, as we drove a mountain leg of the route together, is that the car will adopt a rack-mounted electric power-assisted steering system next year.

The responsive variable-assist system already used on the Regal Turbo is paired with Buick’s three-mode Interactive Drive Control System, or IDCS.  Set to Sport and it tackles the twistiest mountain pass like a sports car.  In comfort mode, it makes the biggest bumps all but vanish – but still leaves you feeling in contact with the road.

When it comes to powertrains, we’ll readily opt for the 2.0-liter turbo, which makes a solid 220 horsepower – but more impressively, a neck-snapping 258 pound-feet of torque.  That’s a segment leader and another reason to reconsider Buick. 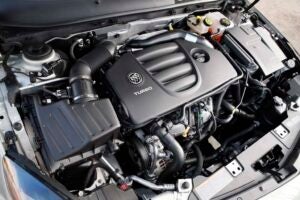 The Turbo is more than reasonably priced, at just under $30,000, though the base car is likely to command the bulk of sales, at a starting price of $26,995.  That gets you a reasonable peppy 2.4-liter, naturally-aspirated I-4 making 183 hp and 172 lb-ft of torque.  One of the nice benefits of having the 2011 Buick Regal paired with the Opel Insignia is that GM could deliver a slick 6-speed for the Turbo model, a much-appreciated but increasing rarity these days.

The decision to go with an all I-4 line-up might take some potential buyers by surprise, but that’s where the vast majority of the market is going, these days.  And it eliminates compromises, especially in such things as engine cradle design.  Hyundai has notably gone the same route with the new and well-reviewed 2011 Sonata.

(Click Here for a review of the new Sonata.)

Performance is still quite reasonable on both Regal models, mid-8-second 0 to 60 times for the naturally-aspirated model, a second quicker for the turbo.  The only place where you felt the 2.4-liter package come up short was at higher altitudes, where it was slow on passes and the transmission seemed to be hunting a bit too much to find the best gear.

The switch to an I-4 pair reflects the increasing interest in fuel economy, and at 19 mpg City, 30 Highway, the base 2011 Regal delivers nice mileage numbers, if not he segment benchmark.  (Figure losing about 1 mpg with the Turbo, once final figures have been calculated.) 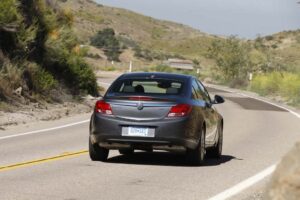 The 2011 Buick Regal will compete in one of the toughest segments in the American market.

Based on numbers alone, one might wonder why not opt for the new Sonata, with an extra 5 mpg Highway – and a base price $7,000 lower.  It’s certainly difficult to argue against the new Hyundai, but Regal does take things several steps up market, and the ones who should be worried are the marketing folks at Lexus, who not only have more serious competition to consider, but also the embarrassment of the brand’s numerous recent recalls to live down.

The 2011 Buick Regal is likely to create some pleasant surprises for those who’d long ignored the brand.  It’s attractive, peppy, well-equipped and anything but, to twist a phrase, your father’s Buick.  The midsize model could be the car that starts driving the long-troubled brand back into the mainstream.