Worth the wait…and more’s coming. 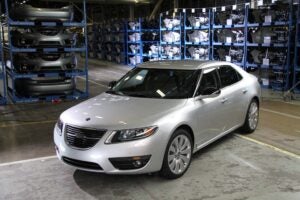 Due to a 7-week production delay, the first 2010 Saab 9-5 Aero sedans are just getting into U.S. dealer hands in any real numbers.

As General Motors plunged into bankruptcy, almost exactly a year ago, it became increasingly apparent the maker would have to abandon as many as four of its North American brands, including Saab.  And though GM hoped to find a buyer for the long-troubled brand it seemed all too likely the Scandinavian maker might be forced to shutter its sprawling design, engineering and assembly operations in the Swedish town of Trollhattan.

It would have been not only an ignominious but ironic end to the marque, which emerged out of the aircraft industry shortly after the Second World War.  That’s because, after years of producing generally lackluster products, Saab finally seemed poised to launch an all-new version of the 9-5 sedan, a product that finally seemed to live up to the high expectations of long-suffering loyalists – and draw in a new generation of buyers, as well.

But, late last year, even as GM began the process of shutting down Saab, the proverbial white knight rode in – in the form of Victor Muller, CEO of Dutch-based Spyker, a maker of low-volume, high-priced supercars.  After some desperate bargaining – and the helping hand of the European Investment Bank – Muller clinched the deal and took control of Saab.  But not before GM disbanded the maker’s board, shut its Trollhattan assembly line and told suppliers to cancel parts orders. 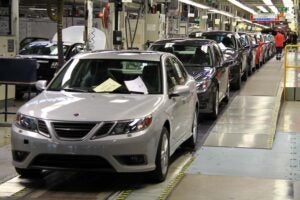 Production has been steadily increasing at the Saab plant in Trollhattan.

It took weeks for Saab’s new management team to turn things and even now, 100 days after Spyker’s Muller signed the closing papers, the assembly plant is producing barely 200 cars a day, a fraction of what it might have been expected to roll out with a product as significant as the 2010 Saab 9-5.  And as compelling.

Or so TheDetroitBureau.com has discovered after spending several days driving the new sedan through the verdant Swedish countryside.  The irony is not that the tiny Spyker – which last year sold less than 50 cars – was able to save the much bigger Saab, but that after 20 years of hefty losses propping up the Scandinavian marque, GM has belatedly come up with the sort of product Saab desperately needed all along.

(Click Here to find out more about Victor Muller and his plan to save Saab.)

If the 2010 Saab 9-5 is any indication of what’s to come from the company’s ambitious new product program, it could take its rightful place within the pantheon of luxury automotive manufacturers.  But all that’s preamble.  Here’s what we found spending some time behind the wheel. 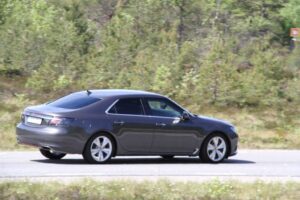 The 2010 Saab 9-5 is a surprisingly quick and nimble package, especially considering its size.

There are those Saab purists who still resent the decision to move away from the brand’s classic hatchback design, but it’s difficult to argue that this is the best-looking Saab in many years, and with the broadest visual appeal.

Give some of the credit to the subtle way the maker has maintained some of its classic design cues, such as the updated three-hole grille, without turning the 2010 9-5 into yet another retromobile.  (“Retro,” suggests Saab’s new Chairman, Victor Muller, “is a lack of imagination.” That’s countered by intriguing new details, such as the distinctive “ice cube” tail lamps.

But what really carries the day for the 2010 Saab 9-5 is the way designers picked up some of the most compelling features of the Aero X concept, which the Swedish maker first unveiled at the 2006 Geneva Motor Show.  No, you don’t get the unusual entry system, where the entire canopy lifts up, but the production car gets a pleasantly long hood for a front-wheel-drive design and the side glass – Daylight Opening, in designer parlance – rises and tapers, giving the 9-5 the look of kinetic motion. 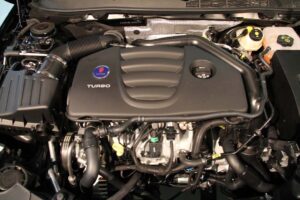 Initially, American buyers will get the 2.8-liter Turbo engine, with the smaller 2.0T to follow.

The fact that our test car’s rear and back glass was tinted adds a subtle air of mystery and elegance.

Measuring 197.2 inches, the 2010 Saab 9-5 is a big car – as much as a half-foot longer than competitors like the Audi A6, BMW 5-Series and Volvo S80.  And the maker has made good use of that in the interior.  Despite the way the exterior appears to taper, there’s significantly more rear seat headroom than with the many new coupe-like sedans hitting the market.  And almost limousine-like legroom, both front and back – even with someone with my 6’2” frame sitting in the driver’s seat.

The interior design theme reflects a Scandinavian mindset, simple yet elegant, with functionality being a critical theme.  That means neither drab nor inelegant.  There’s a reserved elegance to the layout, with its soft LED lighting and dark trim, without trying to win you over with excess bling.  (The American version of the new 9-5 will get the requisite wood trim, by the way, that was absent on our European tester.)

We’re particularly fond of the gauge cluster, which is clearly the most sophisticated part of the package.  In European trim, the bullseye within the speedometer features a circular LCD screen that provides critical information including the local speed limit, and even whether you’ve entered a no-passing zone.  Sadly, that sort of data won’t be available in the States.

Our test model also came with a large Head-Up Display, or HUD, screen.  Here the technology comes into its stride, delivering such useful information as turn-by-turn navigation icons.  One complaint, however, is that the plastic surround of the video display, which is mounted atop the dash, in front of the driver, can cast a harsh reflection in bright sunlight.  Saab officials are considering changing the material to eliminate this issue.

The base car’s seating is comfortable, but best described as competent.  We liked the upscale seating package quite a bit more, thanks to its additional lateral support.  Considering the solid cornering capabilities of the 2010 Saab 9-5, we have a feeling a lot of folks will need that as they seek out the roads that can best exercise the new sedan.

After undergoing a 7-week production shutdown, Saab has had to make some fast decisions on how to meet worldwide demand for the new flagship 4-door.  For the U.S., that means a short 2010 model-year and a 9-5 initially delivered only in Aero trim with the top-line Turbo V-6 powertrain.

Eventually, Americans will get to experience the smaller and more fuel-efficient turbo inline-four 2.0T, which is a surprisingly peppy powertrain in such a big car.  But as the first cars roll into U.S. showrooms, the focus will be on the all-aluminum, 2.8-liter six-banger, which makes a solid 300 horsepower and 295 pound-feet of torque.  The transmission is a quick and smooth-shifting 6-speed automatic with manual mode and paddle-shifters.  The Aero package also features  XWD, Saab’s effective Cross-Wheel-Drive system.

We’re truly hoping that we were able to spot all the automatic speed cameras that dot the Swedish countryside because it is simply too difficult to maintain the Scandinavian nation’s relatively modest speed limits with the Aero package.  It delivers seamless and seemingly instant acceleration on demand.

Among the many options available on the 2010 Saab 9-5, we expect many buyers will opt for the available Brembo brake package, which is the best way to quickly scrub off all that speed.

When adding nearly seven inches compared to the overall length of the old 9-5 – and after 13 years, it really was old and outdated – the new car does bulk up a bit.  Depending on powertrain and options, it will weigh in at anywhere from 3472 to 4365 pounds, from 110 to 485 lbs. more than before.  But the Aero V6 package Americans will first get maintains the prior model’s reasonably acceptable 17 City/27 Highway fuel economy rating, which is among the best in segment.

We had the chance to test both the standard suspension, with its HiPer strut front and Linked H-Arm rear, and the upgraded Intelligent Drive Sense package.  The IDS is driver-operated, using a small knob on the center console.  On rough roads, the comfort mode soaked up all but the worst bumps.  Pushing through the back roads, sport mode helped us glide effortlessly around even the tightest corners.  But we found ourselves defaulting to the mid-level setting, which quickly and automatically switches to the most appropriate shock damper settings.

That said, some of our colleagues made a strong case for the standard package, which seems optimized to more sporty driving without the trick electronics trying to anticipate what’s needed.

Either way, the 2010 Saab 9-5 was a pleasure to drive through the Swedish countryside, comfortable yet nimble on all the roads we could challenge it with.  The hydraulic steering system was spot on, demanding just the right amount of effort and offering a great on-center feel.  Overall, “precise” and “predictable” are two words that come to mind for the overall ride of the new sedan.

If there’s any downside, we found the car suffered from a bit more wind noise than we might have anticipated, along with a bit of tire noise on some of the rougher pavement surfaces you’ll find in the Swedish countryside.

Speaking of rubber, the 2010 Saab 9-5 will feature 17-inch wheels and tires, with optional all-season 18s, or the Turbine design 19-inchers with performance summer rubber.

Once the full range of models rolls into showrooms, you’ll be able to get a 2.0T version of the Saab 9-5 for around $38,000, officials note.  Initially, however, the well-equipped Aero package, with its 300-hp V6, will hit dealerships at $49,165, plus $825 for destination and freight.  Company executives admit there could be a little sticker shock – at least until you realize all that you’re getting for the extra money.

There’s no question that the old Saab 9-5 had more than outlived its usefulness, having first reached showrooms well before the start of the new Millennium.  But even if it weren’t so long in the tooth, the 2010 Saab sedan is such a visually distinctive and technically sophisticated package that it is bound to get noticed by the picky buyers who populate this segment.

At least, it should.  Though the 2010 Saab 9-5 was developed under the old GM management, it’s the right car to usher in a new era for the long-struggling Swedish brand.