Mixing it up between the mid-size and compact segments. 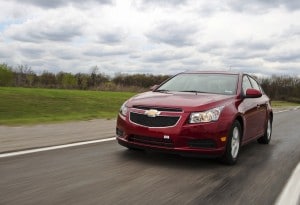 The editor testing a surprisingly good small car from Chevrolet, the Cruze.

In the hotly contested family car market, Chevrolet is finally replacing its aging Cobalt with the Cruze sedan, which is already on sale since 2009 in more than 60 countries throughout Asia and Europe.

The Cruze is a design hybrid, so to speak, since its engineering was done at Opel in Germany and Daewoo in South Korea. North American versions will go into production at Lordstown, Ohio, this summer.

What’s come out of this mélange is a $17,000 to $25,000 offering that GM hopes will take some sales back from the Toyota Corolla and Honda Civic, the two class leaders, when the 2011 model Cruze appears this fall. The Nissan Altima is also a perennial contender in this game, and also needs to be reckoned with.

Nevertheless –  and how is this for a welcome change – Cruze actually has more transmission speeds and more standard equipment than some facing competitors. Toyota is just getting by with a four-speed automatic, and Honda’s manual transaxle has but five gears. If GM keeps this up, it might become a profitable car company again, and taxpayers might get their billions back.

The pricing – before any rebates or incentives appear  – is right on top of the asking prices of Japanese cars, an ambitious move – if, big if, GM can make it stick. Certainly the hardware is competitive, but there are decades of bad small cars to overcome. And I will note, briefly,  the bankruptcy and taxpayer bailout are unhelpful here in establishing badly needed momentum.

GM’s problem with this competent car will be marketing, not equipment level or quality or ride and handing. Cruze is a very, very good family car, and can run with the best. It needs some innovative sales promotion.

However, given GM’s current state, Cruze is more likely in my opinion to cause some competition among buyers inside GM since it straddles the Malibu and other upcoming smaller Chevy offerings. The demises of the Saturn Aura and Pontiac G6 provides some relief from the internal cannibalization problem, though.

The “plain vanilla in styling” Cruze will also face some tough competition from the more aggressively styled Ford Focus when it finally arrives next year, and, to a lesser extent, the aging Dodge Caliber and its incentives.

Cruze is expected to deliver segment-leading 40 mpg highway fuel economy with a new “ECO” model, equipped with a 1.4-liter, four-cylinder, “Ecotec” turbocharged engine and a  six-speed automatic transmission. This is  a tiny powerplant when compared with  the 2.2-liter engine of the Cobalt. Other Cruze models will have a 1.8-liter four-cylinder engine.

A day of test driving  pre-production – but meticulously prepped – Cruze models at GM’s Milford Proving Grounds revealed a pleasant vehicle that is more controlled in wheel and body motions than the Corolla, albeit with equally bland styling. Cruze has  better packaging (110 cubic feet interior volume) when compared to the more aggressively styled Civic (103 cubic feet).

Simply put, Cruze is refined and smooth in comparison to previous GM small car offerings, some of which were, frankly, world class awful. The powertrains are finally upgraded to levels that earlier generations of GM engineers could not envision because of  the institutional or intellectual restraints either imposed or accepted.

The 2011 Chevrolet Cruze will be offered in LS, LT and LTZ trim levels. It has ten standard air bags – the most in the segment – include frontal, head curtain side air bags, front and outboard rear-seat side-impact air bags and new knee air bags.