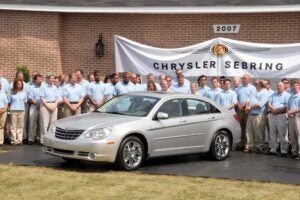 Chrysler apparently will stick with the Sebring name despite the failures of the current model, shown here at its 2007 model-year launch.

Chrysler Group LLC has apparently had some second thoughts about replacing the Sebring name.  Despite a flurry of speculation in the press that the name was history, the change from Sebring to Nassau has been scuttled.

Instead it now appears, after  some internal debate, Chrysler is prepared to keep the Sebring badhr around  for at least a little while longer, according to one inside source with first-hand knowledge of the naming  debate.

“As of last week, the name was still Sebring,” the source said.

The proposed name change was widely reported but was never confirmed officially by anyone at Chrysler after the stories first appeared. Insiders indicated that the “new” Chryler had hoped to make a break with the past, a strategy that seemed simple and logical considering the abject failure of the latest-generation midsize sedans and convertibles, a product of a now-abandoned joint venture between Chrysler and Japan’s Mitsubishi.

Even if it does survive the launch of a restyled model, in the months ahead, the Sebring name probably is on its last legs but Chrysler officials appear to have decided.  The real question is more a matter of timing than anything else.

Going to Nassau could have been a costly fix, as the all-new version, now under development using a Fiat platform, might get yet another name.  Industry analysts contend that the effective launch of a new nameplate into the U.S. market costs as much as $100 million more, on marketing, than it would to promote a new vehicle using the old name.

Nonetheless, even though the Nassau name has been set aside, at least for now, what will likely still be called Sebring gets a significant update in styling, especially on the interior, for 2011.