A Halo Car Coming for Buick?

Showing strong signs of recovery, GM looks for a brand-builder. 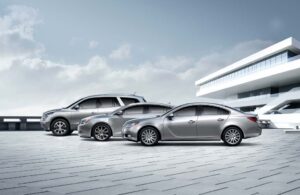 Is there now room for a "halo car" in the expanding Buick line-up?

Sales of the new Buick LaCrosse will set another record for May, senior division officials tell TheDetroitBureau.com, and the brand is hoping to keep that momentum moving with the upcoming launch of the smaller Regal sedan.

Still more product is in the pipeline, including a high-performance Regal GS, with an even smaller sedan, along with a compact crossover to follow.  But as the Buick brand struggles to not just expand its line-up but freshen its image, there may be a good opportunity to add yet another model to the line-up, one that could become an emblem for the resurgent marque.

“I think there’s an opportunity for a halo car for the brand beyond the Regal RS,” said GM Vice President John Schwegman who, in March, became Buick’s marketing chief.

Quick to stress that, “We don’t have a timeframe,” Schwegman said a variety of possibilities are being considered, though tradition would suggest a Buick halo vehicle would fall into three likely categories: a performance car, a “highly-styled” vehicle or a convertible.

What Buick doesn’t want is a repeat of its last attempt to build a halo car, the oft-maligned Reatta, one in a series of two-seaters that General Motors launched, two decades ago.  With the exception of the long-lived Chevrolet Corvette, all those halo cars, which also included the Pontiac Fiero and Cadillac Allante, quickly faded away.

In an interview in California, during the media launch of the new Buick Regal, Schwegman outlined the Buick brand’s aspirations and challenges.

At its peak, in 1984, sales topped 940,000.  By last year, however, they had plunged to just  102,300.  There was heavy pressure on GM to abandon Buick when it emerged from bankruptcy last year, but the maker decided to kill off four other divisions and keep Buick on life-support, largely because of the success the brand was having in China.  Sales neared 500,000 last year and are still growing well into the double digits in the Asian nation.

The challenge, Schwegman said repeatedly, during a several-hour conversation, is to make Buick “relevant” again, and not just to its classic audience.  The brand is taking aim at a younger, more affluent and better-educated customer – and getting that target with the LaCrosse, he contends.

Sales of the new model have increased rapidly since its launch for 2010, and will reach 5,500 for May, Schwegman predicted.  If anything, volume would have touched 6,000 had Buick dealers not run short of supply.

The next big challenge is the midsize Regal – which is based on the successful new European sedan, the Opel Insignia.  With the addition of other models in the pipeline, Buick General Manager Brian Sweeney recently forecast that the division’s sales will double in the next several years, a forecast matched by AutoPacific, Inc. data suggesting volumes will reach 220,000 by 2013.

With just four brands left after its run through bankruptcy court, Schwegman and other Buick officials say they are getting significantly more resources than the brand has seen in decades.  Ironically, one of the challenges, the marketing chief stressed, is to not try to load the line-up with more models than Buick can handle.

“You can wind up with too many and get to the point of diminishing returns,” said Schwegman pointing to the many competitors who have gotten so overloaded with new products they had to resort to “launch-and-leave,” marketing new models just long enough to get them into showrooms then effectively abandoning them.

The list of products in the pipeline will permit Buick to play in segments representing about 50% of U.S. sales, he added, up from 14% today.  And the GMC brand, with which its paired, will cover most of the rest.