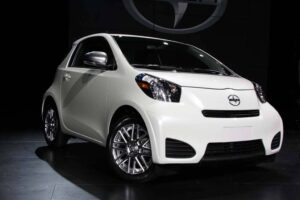 At just 10 feet, nose-to-tail, the 2011 Scion iQ will be the smallest four seater on the market.

Hoping to reverse a sharp, if unexpected decline in sales, Toyota’s youthful Scion division rolled out a pair of new products at the New York International Auto Show, each targeting a distinct, if potentially promising, niche.

Even for a brand that has traditional pushed downsize products, the little Scion iQ is downright tiny, measuring just a fraction of an inch over 10 feet, bumper-to-bumper.  The unusual 3+1 design, according to Scion General Manager Jack Hollis, will be the smallest four-seater in the U.S. when it reaches showrooms during the first quarter of 2011.

The 2011 Scion iQ “is about big ideas – concentrated,” proclaimed Hollis, during an auto show preview.  The vehicle, he added, is designed to reflect what the executive called the “new urbanism,” young buyers who have decided to return to the nation’s big cities and want vehicles that minimize the hassles of struggling through urban traffic or finding parking. 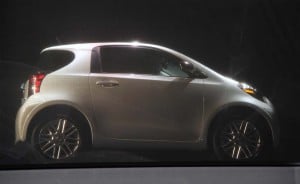 The 2011 Scion iQ hopes to take advantage of the "new urbanism," where - small - size matters.

The interior is laid out in an unusual 3+1 layout, with the front passenger seat slightly offset from the driver’s.  This permits plenty of room for three, and space for a fourth passenger, in a pinch.  The cabin, meanwhile, is well-outfitted for a vehicle of the iQ’s size, reflecting the growing industry effort to break the classic paradigm linking a vehicle’s size with its price and image.

Among other things, the 2011 Scion iQ will deliver an assortment of high-tech safety features, such as electronic stability control.  It will also offer the first rear window airbag, one of ten airbags on the pint-size product.

Power will come from a 1.3-liter engine linked to a continuously variable transmission.  Hollis suggested mileage will nudge into the “upper 30s,” though precise numbers – and a specific price for the 2011 Scion iQ – won’t be released until closer to its launch. 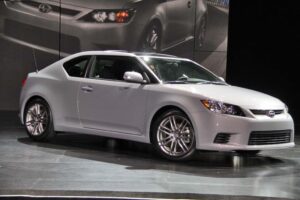 Scion hopes the 2011 tC will appeal to those achieving success early in life.

The debut of the iQ was accompanied by the unveiling of the second-generation Scion tC.  The sporty coupe, declared Hollis, was conceived as an “aspirational vehicle for a young buyer who’s achieved early success.”

The original tC has been one of the brand’s ongoing success stories, even as the second-generation of the boxy xB crossover failed to connect with U.S. buyers.  If anything, Scion is aiming to move the tC nameplate more upmarket, while further emphasizing its sporty feel.

The 2011 Scion tC gets a 180-horsepower, 2.5-liter powertrain paired with either a 6-speed automatic or 6-speed manual.  Along with improved fuel economy, the ’11 edition gets an extra 19 horsepower.  It also gets big, 18-inch alloy wheels and bigger brakes, front and back, featuring 16-inch rotors.

The interior features high-back sport seats, up front, and a 60/40 split/fold rear seat.

Until recently, Toyota’s youthful brand had stuck with a policy of offering no more than three models at a time.  The addition of the iQ bumps that to four, and though Hollis said, “there is nothing set beyond this one,” he acknowledged that the maker is looking at how potential buyers respond to several concept cars Scion has fielded.

There are several possible opportunities for Scion, the executive added, especially as “the entire market is moving to smaller cars.”  One, he suggested might be, “a youthful utility type of a truck.”  But Scion, he concluded, during a post-news conference interview, is studying “where (a) hybrid might fit into the line-up.”