Shoot Out at the Pony Car Corral. 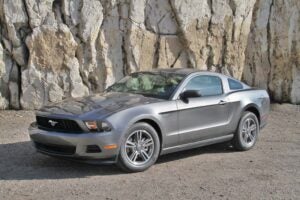 Like a rock? Ford weighs in for 2011 with rock-solid new engines for the Mustang and Mustang GT.

It’s easy being sherriff when you’re the only gunslinger in town.  But ever since the Camaro rolled back into town, last year, there’s been a real shoot-out in the pony car corral, and for the first time in nearly a quarter century, Mustang has been outgunned.

Chevrolet’s reborn muscle car has garnered all sorts of accolades for its styling, power and performance – and even won over skeptics with the sort of fuel economy you never used to associate with the pony car segment.  Add the appeal of being the new kid in town, and it shouldn’t be much of a surprise Ford is suddenly on the run. (See “Camaro Kicks Mustang’s Derriere Again,” by clicking here.)

But the Dearborn maker is armed and dangerous, and will show its willingness to duel when the 2011 Ford Mustang and Mustang GT gallop into showrooms later this year.  And this time, Ford is drawing both a six-shooter and an eight, delivering a pair of powertrains that could put it back in charge again. 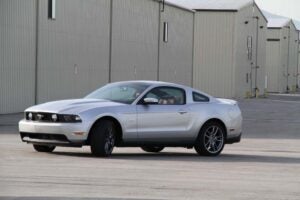 Making 412 horsepower, the 2011 Ford Mustang GT nudges into what was, not long ago, supercar territory.

Just behind her, a new GT is revving up, a deep primal roar that makes fillings shake loose.   There’s something visceral about that sound; just a quick flick of the throttle and lesser mortals tend give you a wide berth as you launch off the stoplight.  And Ford promises you’ll do that a lot faster in 2011, whether you’re driving the “base” Mustang, or the next-generation GT.

In an unusual move, the maker is introducing a pair of new powertrains, this coming year – and it’s debatable which one is bigger news.  The V6 was the first to hit the headlines, Ford boasting that it will deliver 31 miles per gallon on the highway, even while making a solid 305 horsepower.  (And, in the fine print, 19 in the city.)

The figures are all the more impressive when you consider that’s more pony power than you got from the 1998 SVT Mustang, at the time the biggest, baddest boy on the block. 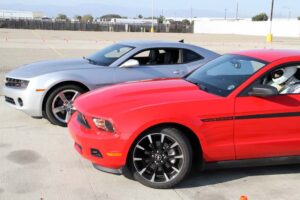 On an eighth-mile drag strip, the 2011 Mustang GT delivered an extra 5 mph over the Chevy Camaro.

The 3.7-liter engine, with twin-independent variable cam timing, or Ti-VCT, can be ordered with either a stick or an automatic.  Either way, you get a nice, resonant engine burble that hasn’t been easy to find among Detroit sixes, especially not the clunky old truck-based V6 that Ford had been using in the Mustang.  The package is all but certain do away with that noxious image of the V6 Mustang as a “secretary’s car.”

As for the GT, well, let’s start with the headline: the five-oh is back, and it’s ready to kick some…Camaro, with a Challenger thrown in for sport.

As TheDetroitBureau.com first reported, a few months back, the new, all-aluminum engine is pushing into what was, not all that long ago, supercar territory, making an impressive 412 horsepower and 390 pounds of torque.  To put those numbers into perspective, that’s nearly twice the 215 hp output of the 1995 Mustang GT – which heralded the return of the Ford V8. 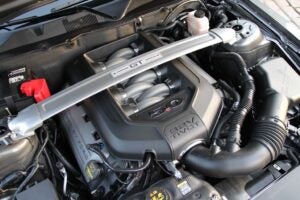 The five-oh is back.

This is not your classic hunk of Motor City metal.  The 2011 Ford Mustang GT  powertrain is a Dual-Overhead Carm, 32-valve all-aluminum design, which also makes good use of Ti-VCT.  The newly-designed heads use new, compact roller fingers and a slick tuned composite intake manifold.

“The heart of the engine is in the breathing,” contends the 5.0-liter’s chief engineer, Mike Harrison.

Oh, and for those who care – a large and growing group – even with all that muscle, the EPA ratings for the GT run 17 mpg in the city and 26 on the highway.  Of course, as the ads used to say, “mileage may vary,” and we can assure you that the way we were driving, we didn’t come close.

(Actually, that’s not entirely true; we found the Mustang V6 really could deliver 30-plus mileage, and without the hyper-miler trick, like shifting to neutral on a downhill slope.) 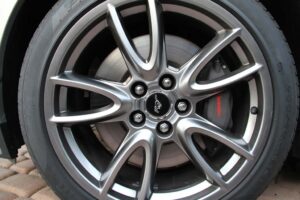 All 2011 Ford Mustang models get improved brakes -- but you now can order Brembos on the GT.

We spent a couple days driving both 2011 Ford Mustang and Ford Mustang GT through the tight and treacherous canyons north of Los Angeles.  We also had the chance to participate in a Mustang versus Camaro shoot-out on an eighth-mile drag strip.  Ford’s pony car routinely beat the Chevy by several seconds and about 5 miles an hour, hitting over 85 mph in our best run.

Of course, while 0 to 60 times might have been all that mattered in the “American Graffitti” era, pony cars are expected to do a lot more, these days.  Like stopping, for one thing.  We’re pleased to see that Ford has upgraded the brakes on both versions of the 2011 Mustang – and is offering optional Brembos on the ’11 GT.

In a move we might have dismissed a couple years ago, Ford engineers opted for electric power-assist steering, or EPAS, on this generation Mustang.  Earlier version of the technology were notorious for their numb, disconnected feel.  No longer.  Yes, EPAS still yields an extra 3% to 5% better fuel economy than power-robbing hydraulic assist, but the new system in the 2011 Ford Mustang has a solid, deliberate quality.  On-center feel is precise and there’s just enough boost not a drop more.

There’s also been plenty of debate over Ford’s decision to stick with a live rear axle on the Mustang, even as Chevy opted for an independent rear suspension when it brought back Camaro.  On paper, Chevrolet should deliver notably better performance, but whether by seat of the pants reckoning or hard number measurements, it doesn’t work out that way. 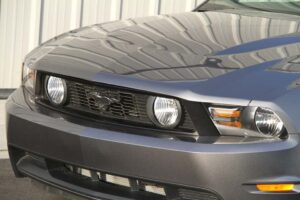 The distinctive nose is your giveaway that this is the 2011 Ford Mustang GT.

Blasting though Down Mulholland Canyon at, ahem, extra-legal speeds, we steadily nudged 2011 Ford Mustang GT harder and deeper into the corners.  About the only time we felt the rear suspension get upset was on a half-mile-long series of whoop-de-doos that might have tripped up even that expensive Italian job.

Now, we did find a few things to complain about with the 2011 Ford Mustang and Mustang GT.  The lack of a passenger-side grab handle, for one thing.  We can imagine spouses all over America lunging for something to hold onto and screaming “slow down.”

Then there’s the automatic gearbox shifter.  No, not the transmission; the six-speed is a smooth delight and, to our surprise, noth only matches the performance of the 6-speed stick but beats it on mileage.  It’s the shifter we don’t like.  It’s retro in the wrong way, looking like it was lifted out of a ‘70s Mustang.  Worse, there’s neither paddle shifters nor a manual mode.

A senior Ford engineering executive, clearly agreeing with our complaint, suggests there could be something coming mid-life cycle.  We hope so.  It’s the one serious mechanical knock we have. 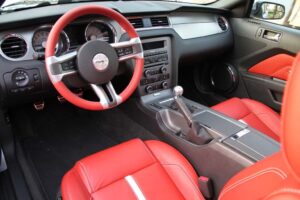 Ford is offering a variety of interior packages for the 2011 Mustang.

There are other reasons for Ford to feel confident about the ’11 Mustang.  The interior is a significant upgrade from past-generation pony cars.  You can even get navigation with the ’11 Mustang, something not available on Camaro.  And Ford is offering a variety of other features unique to the segment, such as HD Radio, its Sync voice control system, and the capless Easy Fuel filler.

What really stands out is the refinement of the 2011 Ford Mustang, especially in terms of NVH, engineer-speak for Noise, Vibration and Harshness.  When you’re not revving the engine the Ford pony cars are surprisingly and quite pleasantly quiet.  Overall, the ride is more like something you’d expect from a near-luxury sedan, not a muscle car.

Can you name that car?

We have to temper ourselves not to sound like we’re taking sides in the shootout at the Pony Car Corral.  Ford’s gunning for redemption, this coming year, and it’s got the ammunition to prove itself.

The 2011 Ford Mustang is a real contender that’s fun to look at and even more fun to drive.  When you add in a great price and unexpectedly solid fuel economy, we expect an interesting fight ahead.