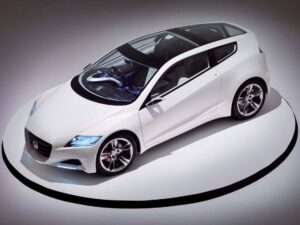 Honda is launching its latest dedicated hybrid, the CR-Z, and insisting it won't run into the hybrid braking problems of Toyota's Prius.

Just what impact the safety scandal at Toyota will have on the rest of the automotive market is uncertain, but the Japanese maker’s arch-rival, Honda, is working to ensure it won’t be tainted, as well.

“Product quality is extremely important to us,” asserted Honda CEO Takanobu Ito, as the maker officially debuted its latest gasoline-electric hybrid model, the CR-Z, during a Tokyo news conference.

Initial sales reports hint that Honda may be picking up Toyota buyers, especially in the U.S. market, where the safety crisis has been widely covered by the media.

But, like other makers, Ito avoided any appearance of gloating over Toyota’s ongoing woes.  If anything, he appeared to take a cautious position about growth and the potential it brings to start making mistakes.

But it was only a few weeks earlier that Honda had to expand the recall of products including the 2001 and 2002 Accord sedan, Civic compact and Odyssey minivan because of faulty airbags.  Since the first defect announcement, 15 months ago, the number of vehicles on the callback list has grown to 437,000.

The Japanese maker did make a point of emphasizing that the 2011 Honda CR-Z uses a different braking system from the 2010 Toyota Prius and, Honda promised, would not suffer the same problems — in which brakes can unexpectedly release when a Prius hits a bump or a slick patch of road,

Meanwhile, some industry analysts have been questioning some of the steps Honda has taken in recent years.

Several of the maker’s newer products have received mixed, even negative reviews, including the Acura ZDX and second-generation Honda Insight hybrid, which is selling significantly below initial expectations.

But the ongoing recall of the 2010 Toyota Prius, due to defective brakes – and the possibility that earlier years might suffer braking problems – could provide a coincidental boost for Honda, which is rolling out the new CR-Z, starting in the Japanese market and then moving to other key markets, including the United States.

More stylish and sporty than the Insight, the CR-Z harkens back to the long-lamented Honda CR-V, especially with its unusual, twin-window hatch.  The name is short for Compact Renaissance Zero, but unlike Toyota’s hybrids, such as the Prius, Honda’s newest gasoline-electric model cannot actually run on batteries alone.  They only serve to assist the hatchback’s 1.5-liter inline-four-cylinder engine – which can be mated to either a 6-speed manual or a continuously variable transmission.

But it will be peppier than the sluggish Insight, Honda claims, and can operate in three modes: Economy, which favors higher-mileage, Sport, which delivers better performance, or Normal, which balances both.

Using the more lenient Japanese system – which reflects the significant amount of time the nation’s drivers spend in traffic – the CR-Z is rated at a solid 58.8 mpg.  The more cautious American testing method yields an EPA rating of 36 mpg during the City cycle, 38 mpg  on the Highway.

The urban numbers could prove appealing, analysts say, for motorists who spend lots of time in traffic, but considering the CR-Z’s compact size, its highway fuel efficiency isn’t particularly compelling.  The new 2011 Hyundai Sonata, which falls into the mid-size category, gets 38 mpg on open roads, though just 24 in-town.

Still, Honda is not counting on generating a lot of demand for the CR-Z, which will carry a base price of $25,300 in Japan -–with the company not yet releasing figures for other markets.  Choosing to err on the cautious side, Honda is forecasting global demand of just 1,000 copies of the 2011 Honda CR-Z a month.