Erase your memory banks and start all over. 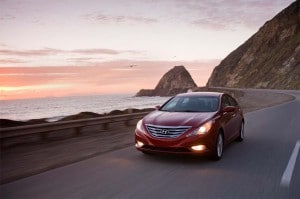 Unless you’re a true novice to the new car market, you may have some preconceived notions about Korean-made products – and they may not be all that kind.  But if you’re looking for a midsize sedan, you might want to erase your memory banks and start all over.

The 2011 Hyundai Sonata should finally put to rest all those bad jokes and nasty references the Korean maker earned – and deservedly, we should add –during its early years in the U.S. market.  The products Hyundai dumped into American showroms, when it debuted, back in 1986, were, to put it politely, cheap and cheerful.  They might have saved you money up-front, but you were likely to shell it out later, at the repair shop.

Hyundai’s quality has been steadily climbing up the charts, to the point where its industry-leading 10-year warranty is almost irrelevant.  (Though, Hyundai, won’t dream of taking that feature away.)  But while quality may be “the price of admission,” according to Hyundai of America CEO John Krafcik, it’s not the only thing that matters.)

In today’s hotly competitive market, it takes a lot to get your product on a buyer’s radar screen.  You also need good design, great features, solid performance and impressive fuel economy.  Oh, and don’t forget an affordable price tag.

Too much to ask?  Not if you’re considering the 2011 Hyundai Sonata. The Korean carmaker’s latest mid-size incarnation scores surprisingly well on all counts, to the point where we had to pull out the magnifying glass to find a few complaints to balance out an otherwise glowing review. 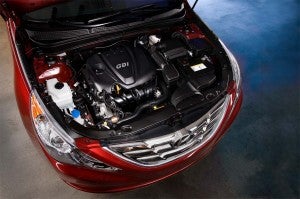 No room at the inn for a V6. It'll be four cylinders only for the 2011 Hyundai Sonata.

Let’s start with design.  As Krafcik readily admitted, during a long drive in which he served as my co-pilot, Hyundai has traditionally taken a dowdy and derivative approach to styling.  But the ’11 Sonata takes the maker’s awkwardly-named Fluidic Sculpture design language to the point where it finally has some meaning.

Though Hyundai will bill the ’11 model as a sedan, it is better described as a four-door coupe, with a gracefully arcing roofline that seems to flow almost from bumper to bumper.  The wraparound headlights now embrace a trapezoid grille that no longer looks like a lazy rip-off of Mercedes.  A chromed character line underscores the Sonata’s big shoulders, while a deeper crease flows from the front wheel well right into the sedan’s tall tail.

You may have a hard time reconciling a base price of less than $20,000 with the decidedly upscale feel of the 2011 Hyundai Sonata.  And equally surprising is the fact that a fully-loaded version, including navi and premium sound, will set you back less than $30,000, including taxes and destination charges.

Climb inside and the surprises continue.  The fourth-generation Sonata is, overall, about the same size as the model it replaces – outside.  But careful engineering delivers a cabin that falls into the EPA’s Large Car class.  That means plenty of room for rear seat passengers, as well as those in the roomy, twin cockpit-style front.

The two-tone interior makes use of some surprisingly sophisticated materials.  Of course, there’s plenty of plastic.  You’ll find it on top-line luxury vehicles.  But the 2011 Hyundai Sonata is carefully crafted to look more upscale, with good graining and textures.  The optional piano black finish for the center stack is a particularly nice touch, as is the new steering wheel and the twin-gauge instrument cluster.

Higher-end models offer such niceties as keyless start, but even the base Sonata is equipped with such features as Bluetooth – and on the safety side, ABS, traction control, electronic stability control, among other features.  Six airbags also come standard.

On the infotainment front, the basic audio package delivers an acceptable 104 watts through six speakers and you can source your sound from AM/FM/XM/CD and MP3 – with a dedicated iPod connector.  There’s a 360-watt upgrade that also gets a subwoofer and 6-disc changer.  And on the 2011 Hyundai Sonata Limited, you can opt for an even sweeter 400-watt Infinity sound system. 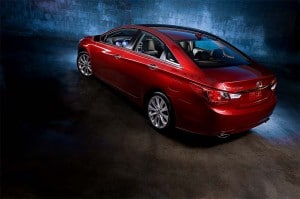 The 2011 Hyundai Sonata could easily be described as a 4-door coupe, though Hyundai will stick with calling it a sedan.

As mentioned earlier, it took a truly nose-to-nose inspection to find even the slightest gaps in the interior fit-and-finish.  If we did have a complaint it was with road noise, especially on concrete pavement.  That was the rare weakness, considering Hyundai engineers did an otherwise, ahem, sound job of insulating out wind and engine noise,

During a background briefing, prior to our first drive, we were surprised to learn Hyundai has designed the new 2011 Sonata solely for inline-four-cylinder powerplants.  No V6?  That seems almost heretical until you look at the sales data for the maker’s primary Asian competitors, like Honda and Toyota, which sell almost exclusively I-4s.

For 2011, then, you’ll have your choice of a 2.4-liter GDI (gasoline direct-injection) all-aluminum powerplant that makes 198 horsepower and 184 pound-feet of torque or a, oh, wait, that’s it until later this year, when Hyundai will add a more powerful turbocharged 2.0-liter I-4.  And later still, look for the maker’s first gasoline-electric hybrid, which will be built around the 2.4-liter GDI.  (Note that in SE trim, the ’11 Sonata gets twin exhaust pipes and a bump to 200 hp and 186 lb-ft.)

The base 2011 Hyundai Sonata comes with a 6-speed manual, but sadly, that’s it.  No stick, even on the sporties Sonata, though that version does get a paddle-shifted version of the 6-speed automatic, which is a reasonably quick and transparent gearbox.

The decision to go with only an I-4 line-up came early on in the fourth-generation Sonata development program, and it paid off well.  Significantly, it meant that the basic platform was optimized for a smaller powerplant, a critical factor in shaving more than 100 pounds off the weight of the car compared to Sonata Gen3, to 3,199 pounds.

Weight, it’s often said, is the enemy of both performance and fuel economy.  On a power-to-weight ratio, the 2011 Hyundai Sonata is best-in-class.  It’s also a winner on the mileage meter.  With the 6-speed manual, the new sedan is rated at 24 mpg City, 35 Highway.  The only change with the automatic is the City rating, which dips to 22.

Challenged by Hyundai to see what I could accomplish on one long stretch of mountain roadway, I recorded a mileage run of 40.8 mpg.  I actually would have come closer to 45 if not for heavy truck traffic along one stretch that had me constantly on the brake.  Of course, I used some tricks to pull this off that the typical driver wouldn’t – and probably shouldn’t – copy. 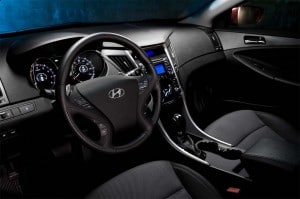 Hyundai has taken to promoting itself as America’s most fuel efficient automaker.  Of course, it doesn’t have the wide range of trucks in the line-up to offset its smaller models, like a Toyota or Ford, but nonetheless, expect to see that 35 mpg figure heavily promoted in the marketing campaign for the 2011 Hyundai Sonata.

But there are other things to pitch, like the pleasantly refined ride and confident steering feel of the new sedan.  During a day of driving through the hills and valleys, over the highways and mountain roads outside San Diego, we found the ’11 Sonata to be a solid rival to anything in its class.

Credit the independent MacPherson struts used up front and the multi-link rear suspension, as well as forward and rear stabilizers.  The SE, meanwhile, features a sport-tuned version of the suspension.

Riding with CEO Krafcik, I learned that Hyundai has – no surprise – scored some big gains in terms of the number of potential buyers that will consider its products.  But even then, that means the 2011 Hyundai Sonata might be on the shopping list of, at most, 30% of midsize buyers.

Too bad for the remaining 70%.  If they’re simply avoiding a brand they thought they knew it’s time for a little re-education.  But with the launch of the 2011 Hyundai Sonata has the perfect textbook.  Don’t be surprised to see a lot more folks take a closer look when they see this coupe-like sedan drive by.