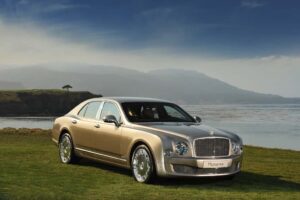 You won't see the new 2010 Bentley Mulsanne at next month's LA Auto Show. A number of luxury makers have abandoned this year's event.

Despite the fact that Southern California is the country’s largest luxury market, a long list of premium automakers won’t be displaying at the upcoming 2009 Los Angeles Motor Show.

Among the manufacturers pulling out of the annual event are Bentley, Ferrari and Lamborghini, though LA show organizers note that a few of their traditional high-line brands will maintain a presence at Staples Center, along with several new luxury participants.

“Bentley won’t have a presence in LA,” confirmed the British automaker’s chief U.S. spokesman, Dave Reuter, adding that at a time when everyone is cutting budgets, Bentley is looking for “a better use of our resources.”

An official with Ferrari echoed that point, noting that the Italian brand and its sibling marque, Maserati, have pulled out of Concours Hall, the high-visibility section of the convention center where most luxury brands have traditionally displayed their wares.

“It’s just the economy.  We’re cutting back on a lot of things,” the executive said, asking not to be identified by name.

While the final list of show participants could still change before December 2nd, when the event’s press previews begin, it now appears that LA will also see a minimal presence by Aston Martin, with the company handing things over to its dealers to pull together a display.

The decision to pull out of Los Angeles by such premium brands comes as a surprise to some observers, since the expansive L.A. metro area is such a big market for premium automobiles.  And the more expensive the better.  The U.S., on the whole, makes up half the market for Mercedes-Benz’s premium AMG products.  But Southern California alone accounts for 25% of total global AMG sales.

But, “we just don’t sell a lot of cars off the show floor” in Los Angeles, noted an official with one of the brands pulling out of the show.

Show organizers told TheDetroitBureau.com they’re disappointed by not entirely surprised by the exodus, pointing to the impact the recession has had on the luxury car market.

“The premium market has been especially hard hit,” noted Mark Templin, general manager of Toyota’s Lexus luxury division – which is remaining in the show.  The more expensive the car, on the whole, the worse the impact of the recession.

Bentley sales, for example, are down by roughly half, in the States, while Lamborghini is off more than 40% for the year.

“These makers are just being careful where they spend their money,” acknowledged LA show spokesman Brendan Flynn.

While some big names are leaving, a few key luxury marques are staying put, notably including Rolls-Royce and Porsche.  And, noted Flynn, some new entrants into the high-end market are grabbing the space vacated in Concours Hall, including Spyker, the Dutch manufacturer of top-end sports cars, and Fisker Automotive, the California start-up that will launch production of its premium plug-in hybrid, the Karma, in 2010.