Along with re-makes of 2010 Range Rover and Range Rover Sport, British marque signals a new direction. 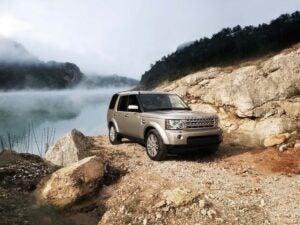 In its first new product introduction since the takeover of Jaguar and Land Rover by the Indian conglomerate Tata, Land Rover has introduced a trio of new luxury SUVs for the 2010 model year, the LR4, which replaces the LR3, a heavily reworked Range Rover Sport, and an all-new Range Rover.

Like many recent luxury entries, including the 2010 Mercedes-Benz E-Class, Land Rover is playing the value card for a recession-weary buyer.  The new LR4, which will come in the door at a price of $51,750 (including D&D charges), is some 5.6 percent less expensive, comparably equipped, when compared the 2009 LR3.

On or Off Road!

Aside from the obviously cleaner and more modern appearance, including new fenders without plastic flares, hood, grille, lamps and air intakes, the LR4 has substantial chassis upgrades for better, less-nervous highway ride.  A new TRW variable-rack power steering system takes care of that, along with new suspension arms and knuckles that move the center of gravity closer to the roll center, which means far less body roll in fast corners.  The all-wheel-drive system carries a new center differential that biases more power to the rear tires on full-throttle acceleration. 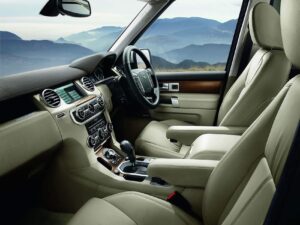 Inside, the LR4 has an entirely new dashboard, instrument panel and center console, all of which look far less vertical and stark than the LR3 interior and far more integrated.  There’s a new multi-function steering wheel, new seats and door trims and new wood trims.  Among LR4’s options is a new 5-camera observation system, two in the nose, one in each front door and one in the rear.  Camera thumbnails are displayed on the nav screen, and can be selected, and images enlarged and zoomed.

We turned the forward cameras and headlamps on for a river-crossing exercise and we were able to see the rocks under the water in real time, a unique Land Rover feature that could come in handy in many situations.  The side cameras will be useful for determining body clearance in tight off-road situations and the rear camera can be selected for parking or lining up trailer hitches. 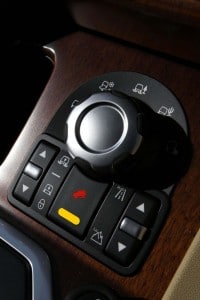 The Terrain Response control used on the 2010 Land Rover LR4 (and other LR offerings) intuitively adapts to a variety of driving conditions.

The engine is a new V-8 shared with other Land Rover and Jaguar products, the JLR 5.0-liter V-8 sporting 375 horsepower and 375 foot-pounds of torque across a wide RPM range. Those number work out to increases of 25 and 22 percent, respectively, compared to the outgoing 4.4-liter Land Rover V-8.

LR4 chief engineer Stuart Frith told us that the new engine has a deeper sump for better lubrication at severe angles, and that the engine’s pumps, electric motors, and drives are now completely waterproof.  He said the new V-8 would propel the hugely heavy LR4 from 0-60 mph in 7.5 seconds.  The engine is paired with a revised ZF 6-speed automatic transmission with paddle shifters.

A new Sand Launch control and a Rock Crawl setting have been added to the LR4’s Terrain Response selector, and the LR4 now has trailer stability control and roll stability control. For those not familiar with Terrain Response, you simply rotate a dial on the center console and the system automatically adapts to various driving situations, such as snow, mud or sand, adjusting everything from gearshifts and braking behavior to throttle tip-in.  The result is far more intuitive than any but the most experienced off-roaders might be able to achieve by modulating foot and hand.

While the new LR4 is the most notable new model joining the Land Rover line-up for 2010, the British marque has plenty more going on, including a dramatic remake of its top-line offerings. 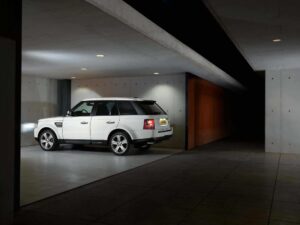 While it may be a daily driver, the updated 2010 Range Rover is more than comfortable in challenging off-road settings, as well.

The 2010 Range Rover Sport ($60,495), built largely on the same underpinnings as the LR4, has a new nose with a two-bar grille, new hood, bigger fender and flares, new side grilles, new lamps, and new wheels, and the same chassis and powertrain upgrades as LR4.

But the Sport now offers an optional supercharged 5.0-liter V-8 engine that churns out an amazing 510 horsepower and 461 foot-pounds of torque, 29 and 36 percent improvements respectively.  The company says the naturally aspirated Sport will run 0-60 in 7.2 seconds, and the supercharged version ($74,195) will do the 0-60 sprint in a mere 5.9 seconds.  Because the Sport is so much more capable than the LR4, it has 6-piston Brembo brakes.

The Sport will have an optional sixth mode on the Terrain Response selector called Dynamic, and it will use predictive, adaptive shock absorbers that sample road conditions at each corner 500 times per second and adjust continuously.  Supercharged versions will add Adaptive Dynamics on top of that, shocks absorbers with a controller that samples terrain 500 times per second to predict shock settings.

The Sport has a completely new interior as well, with a new audio and video entertainment system, a touch screen, new instruments with a large driver information display between the major gauges, and a hard disc drive for navigation and music storage. 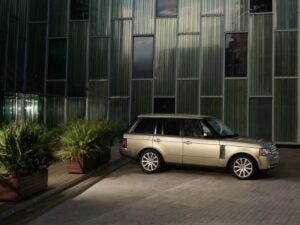 The powertrain lineup is identical to that in the Range Rover Sport, the 5.0 V-8 and the supercharged version, both with the 6-speed ZF automatic.  The big RR also gets the Dynamic range addition on the Terrain Response dial, and an optional Adaptive Dynamics package using Bilstein continuously adjustable shock absorbers.  Both the HSE and Supercharged braking systems have been upsized and upgraded.

The interior has been completely remodeled and now features the worlds’ first virtual instrument panel, laid out on a 12-inch-wide TFT screen and able to display huge amounts of information about the vehicle, the drive system, differentials, steering, ride height and so on in beautiful, sharp full color, controlled from the steering wheel.  The central multifunction screen has also been updated with new touch graphics.

We drove all three new models off-road and on-road in multiple locations in Scotland and England over the course of a four-day test.  On the road, even with massive 19- and 20-inch tires, the trucks were quiet and completely composed, with very little body roll in hard, high-speed corners, and reasonable levels of tire noise and wind noise, but far from library quiet.

Off road, we did 0-100-0 acceleration and braking tests on an old race track, we slalomed through water fountains in the pouring rain, we forded rivers and creeks, we literally went up a rocky creek bed from bottom to top, we hopped rocks and logs, we chased sheep across meadows; we did everything a reasonably experienced off-roader would do recreationally, and we never had to put the trucks in reverse and try again, not even once.

With normal street tires, which quickly filled their treads with mud, we got where we were going every time, all the while sitting inside trucks with entirely new levels of style and luxury.

These three new trucks are the most powerful, most capable, most comfortable and most luxurious trucks Land Rover has yet built, and if this is what Tata’s hands-off policy can do, let’s hope they keep their hands off the guys from Gaydon.

They may not have a choice.  Since purchasing Land Rover — and Jaguar — Tata has seen its home market collapse, sending the once profitable company into a tailspin.  It now has to hope that both its luxury acquisitions will be able to turn things around, effectively on their own, though both marques do have plenty of critical new product to pitch to the market.