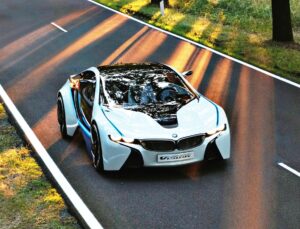 There is no question that Vision is an extremely sophisticated engineering exercise.

How about a 3-cylinder turbocharged diesel M car from BMW?

Well, if you add two electric motors, one on each axle, and lithium ion batteries under a sleek 2+2 body, the additive power effect is 262 kW/356 horsepower, with maximum torque of 800 Newton meters (590 lb-ft.). Is that an M?

BMW claims the sports car will accelerate from zero to 100 km/h in 4.8 seconds, with an electronically limited top speed 250 km/h. With all that torque, there’s little reason to doubt that Vision is fast. Fuel consumption in the EU test cycle is 3.76 litres/100 km and CO2 emissions are 99 grams/kilometer well under proposed EU standards — the main reason this particular configuration exists.

As a plug-in hybrid, Vision is able to cover the entire test cycle under electric power alone. BMW calculates this reduces the CO2 emission rating to just 50 grams per kilometer, which takes the sources of energy used for generating the electric power consumed into account (EU electricity mix).

Whether Vision makes it to production or not is moot. We’ll wager one or more BMWs with a powertrain like this will be used to generate credits so that BMW can keep selling more conventionally figured cars that consume many more liters of fuel and emit what would otherwise be illegal levels of CO2. 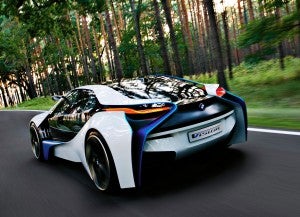 Whether or not the car makes it to production is another matter, but the technology used will.

Using only the energy stored in its 98 lithium polymer battery cells, Vision is able to cover a distance of approximately 50 km or 31 miles in the electric mode alone, as we said enough to drive the test cycle in theory without ever firing the diesel engine of the 1,395 kg (3,076 lb) mid-engine car. Overall, maximum range is stated at 435 miles.

Here’s how BMW calculates this will help save the planet: To determine the consumption of electric power, apparently, the only requirement is to compare the charge level of the battery before and after the test cycle. By applying this measurement process, the Vision concept car consumes 17.5 kW/h per 100 kilometers, equal to a CO2 emission rating of just 50 grams per kilometer in the EU test cycle.

To determine the total volume of CO2 emissions when driving in the all-electric mode, new standards for measuring the level of fuel consumption are currently being prepared for hybrid and electric cars with a plug-in power supply. Applying this proposed calculation method, the CO2 emission ratings generated by Vision are reduced further to just one-third of the original 99 grams per kilometer. (A similar adjustment is under development in the U.S. and is responsible for some unbelievable mileage claims such s the 230 mpg GM claims for the Volt.)

This is the reason why you will see all makers that sell cars above, oh, compact size produce plug-in hybrids during the next several years as CO2 standards tighten. It’s also the reason why there likely will be enormous taxpayer financed subsidies coming for such cars – at least $7,500 per car is being proposed plus various other incentives – since the powertrain, batteries and electronic controls are very, very expensive. Right now, the battery pack alone is in the $10,000 range. As a result, plug-in sales will be limited, as will their needed credits for makers, unless their costs come down. It’s in part the old circular problem: high costs equal limited sales equal high costs.

The small engine that allows Vision to have a useable range is a turbocharged diesel. With its compact dimensions, the three-cylinder fits ahead of the rear axle. Moreover, there still is room for a tiny trunk of 5.3 cubic feet.

The engine itself is a 1.5-liter, three cylinder, common rail, direct injection design. The turbocharger has variable intake geometry to increase efficiency and decrease lag.

The output per liter of 80 kW/109 horsepower just might be a record for diesel technology, if it makes it into production. It seems ideal for powering a small, relatively inexpensive conventional car. All European makers are pursuing small diesels since European emission regulations are less stringent than in the U.S. and the price of diesel fuel is subsidized.

The power delivered by the turbo diesel is sent to the rear wheels via a six-speed double-clutch gearbox, which is already in wide use at the maker. In between the engine and the transaxle is an electric motor.

This diesel is also assisted by another electric motor at the front, in what looks to be a complicated design that will require lot’s of development work to obtain effective interaction among all the powertrain elements, since the motor on the front axle must work with and a full-hybrid system at the rear.

BMW claims the driver benefits from the relative efficiency of the electric motors over a far wider speed range than with a “conventional” hybrid car.

The rear, full-hybrid system is a version of the BMW Active Hybrid 7 production model that is a variant of the  dual mode system  developed by General Motors. Running as an electric motor it develops a 25 kW and is able to reach a peak of up to 38 kW. When braking the electric motor acts as a generator to recharge the batteries.

The second electric motor acts on the front axle. This power unit offers permanent output of 60 kW and peak torque of 220 Newton-meters or 162 lb-ft. Extra power of 84 kW is available for a period of up to 30 seconds, and for 10 seconds the electric motor is even able to develop 104 kW. Power is transmitted through a two-stage, single-speed reduced-ratio gearbox.

Vision is able to run completely under electric power, with the power of the turbo diesel engine alone, or through an infinite combination of the three power sources. Depending on driving conditions and the driver’s need for speed, the two electric motors may be used both for accelerating and for regenerating energy when braking or coasting.

The lithium-polymer cells each have a capacity of 30-ampere hours. They develop a continuous output of 600 amps at a voltage of 3.7. For a period of 30 seconds, each cell can develop a maximum output of 1,200 amps.

Linked in series the cells generate a nominal voltage of 364 volts. Their gross storage capacity of the battery is 10.8 kW/h. By offering what BMW calls an unusually high discharge of 80%, the battery delivers 8.6 kW/h for driving the car.

There is no question that Vision is an extremely sophisticated engineering exercise. Whether or not the car makes it to production is another matter, but the technology used no doubt will.