Q2 Profit of €283 million comes from Chinese and Brazilian markets as Europe and U.S. remain weak. 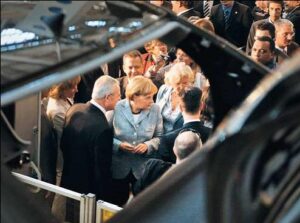 Volkswagen AG, the biggest carmaker in Europe and soon to be owner of Porsche, rung up second quarter results that look like the worst of the Great Recession is over for it, according to our reading of its latest financial statement issued this morning.

The Wolfsburg-based German maker saw sales of light vehicles decline 4.4% during the first half of 2009, as the global sales declined 18%. This relatively better performance than the overall market came in spite of troubles with its Skoda and Seat brands in Europe, notably in Spain and the U.K.

The real growth, which kept VW Group in the black during Q2 to the surprise of some analysts, came from strong performances by the VW brand in Brazil (+7%) and China (+23 %), now VW’s largest market. Audi also contributed with its strong performance in the Chinese market.

In the first six months of the year, Europe’s largest automobile manufacturer delivered 3.1 million (H1 2008: 3.3 million) vehicles worldwide. Sales revenue declined by 9.4% to €51.2 billion (€56.5 billion ’08) in the first six months due to volume-related factors. Operating profit amounted to €1.2 billion (€3.4 billion), of which €928 million is attributable to the seasonally strong second quarter. The Group generated profit after tax of €494 million (€2.6 billion).

“The course of the year so far shows that we are excellently positioned, thanks to our multi-brand Group model. Even in a particularly difficult phase in the international automotive markets we were able to gain share in key markets. This has further improved our position on our way to the top,” said Prof. Dr. Martin Winterkorn, Chairman of Volkswagen AG’s Board of Management.

The Group’s new models include vehicles such as the Volkswagen Golf VI, Audi Q5, Škoda Superb and SEAT Ibiza. Volkswagen Passenger Cars, Audi, Škoda and SEAT brands outperformed the market as a whole. However, the growth of the individual brands and business fields was still hit hard by the global financial and economic crisis. The Volkswagen Passenger Cars brand recorded a lower operating profit of €216 million (€1,295 million) for the period January to June.

The Audi premium brand recorded a 13.6% decline in unit sales. However, with an operating profit of a €823 million (€1,299 million ’08), it is doing relatively well in the current depressed environment.

At the Škoda brand, a decrease in unit sales of almost 26% and unfavorable exchange rate conditions cut operating profit to €135 million (€381 million ’08).

SEAT recorded a 25% percent decline in unit sales and an operating loss of €159 million (operating profit of €2 million ’08) because of the further deterioration of the Spanish passenger car market.

The Bentley brand was unable to escape the slump in unit sales in the luxury segment, leading to an operating loss of €114 million (operating profit of €85 million ’08).

Volkswagen Commercial Vehicles profited from the sale of the Brazilian heavy truck business in the first quarter and generated an operating profit of €463 million (€215 million ’08) in the first half of 2009.

With an operating profit of €321 million (€523 million ’08), Volkswagen Financial Services again made a significant contribution to the Volkswagen Group’s earnings.

Volkswagen said it is not expecting any sustained improvement in the macroeconomic situation in the remaining months of 2009. “The outlook remains uncertain and the global economic environment is challenging. Global economic growth in 2009 will be negative. The world’s automotive markets are being especially hard hit by this trend and will decline substantially compared with the previous year.”

“The business outlook clearly remains uncertain, and we must continue to expect risks. However, we have not only the necessary scale, but also tremendous technical, ecological and economic potential. This is paying off in the crisis. And it’s why we remain committed to our goals. In 2009 alone, for example, the Group brands will launch 60 new models, product enhancements and successors in the market,” said Winterkorn.