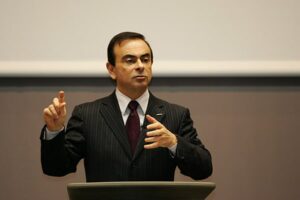 "2009 continues to be a tough year, but we are beginning to see positive results from the measures taken under our Recovery Plan."

The first quarter saw the launch of three products  — Pixo in Europe, NV200 in Japan and G37 convertible in the United States. In fiscal 2009, Nissan says it will launch a total of eight all-new products globally.

“2009 continues to be a tough year, but we are beginning to see positive results from the measures taken under our Recovery Plan,” said Nissan President and CEO Carlos Ghosn. “We are on track towards positive free cash flow for FY2009 and will remain cautious in our outlook for the rest of the year.”

Nissan’s forecast remains unchanged for the full fiscal year with an operating loss of ¥100 billion ($1.05 billion, based on ¥95:$) and net loss of ¥170 billion yen ($1.79 billion). After having missed the market for hybrid electric vehicles now dominated  by Toyota and to a lesser degree Honda, Nissan’s two larger Japanese competitors, Ghosn will unveil an all electric car in Tokyo next month. The company and its alliance partner, loss-making Renault, are betting heavily on government mandates and subsidies to create mass market demand for what heretofore are automotive curiosities with  limited sales.