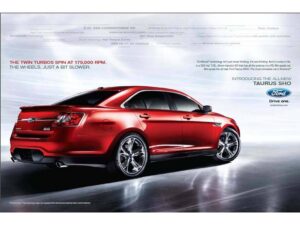 Ford is putting on a heavy ad push for the Taurus.

Thursday’s reveal of the new advertising for the new 2010 Taurus was held in the vast space of Ford’s digital design studio with stunning video capabilities that were utilized to the fullest.

The presentation of the rationale behind the advertising for such an important launch of Ford’s “halo car” was as impressive as the commercials, print ads and web videos were.

The new Taurus deserves its own recognition and rewards from essentially a new group of prospective buyers.  I applaud Ford’s decision not to, as some auto writers on hand suggested, that Ford should have returned to days of yore and wonder of 1986.

Twenty-three years ago the Dow Jones was 1,995, a stamp cost .22¢, oil was $11 a barrel and Oprah show began.  Too many years have elapsed to resort to historical precedence as a basis of evaluation or promotion of such an important vehicle.  And who gives a damn about the old models anyway?

The past, in this instance, is not prologue. This is a new full size sedan which should stand on its own four wheels, er – merits and it does.  The demographic target is a 46 year old male today, but when the Taurus was first introduced he was just getting out of college or still asking dad for the family buggy.  His memories, if any, are dim and he is not a Luddite.

Today he is a product of the video, television and Internet world. Technology is a good and valued friend and resource to be used as needed and part of his everyday life, personally and professionally.  Technology is the focus of the Taurus advertising and web videos and to me, is right on target.

Ford admitted it has to win new customers for the Taurus and that’s smart, very smart.

The creative response, particularly two of the five web test videos that were screened, are the best automotive test demonstrations I’ve ever seen. They are precise, not pejorative or pandering.  They follow a simple scenario, “This is the test, these are the results, you decide.”

And isn’t that a positive approach in talking with consumers?  Outstanding work, well conceived and executed sets a high benchmark for Ford’s competitors to follow.

Every year the automobile industry introduces countless new models in various venues in the U.S., Europe and other geographic locations at exotic sites, interesting locales or auto shows.

Of the reveals I’ve attended, few have been held in the hometown of the presenters, factory tours are rare, and casual, informative conversations with those responsible for the vehicles are unusual.

BMW’s introduction this week of the new 760Li with a new snarling, ball busting, gas guzzling V12, was the opposite. It was held in Munich, we toured the engine factory, attended a media presentation in an amazing, historic venue, listened to translations of techno, engine and styling details which were augmented with an amazing video animating the guts of the new engine.

All without dissonant, cacophonous music or a eye damaging laser light show, spoke with the hands-on people we needed to and enjoyed a very nice dinner.  The theme, was white.  Simple, yet very stylish. White notebooks, white pens and dinner was served on a room filled with white pedestal tables and chairs the plates were white too.

The next day test vehicles were distributed at the Velt, the architecturally stunning edifice – it’s more than just a building, where customers can take European delivery of their Bimmer.  And in keeping with the theme mentioned earlier, every 760Li was in white.

To reach the destination alternate routes – one via autobahn for high speed driving, another slower and longer through scenic, bucolic vistas in the rolling undulating hills and villages was longer, but allowed for driving under a variety of road conditions, including the rather narrow, this is not the autobahn, but the German drivers think it is for speed roads. Daunting, more than dangerous, it put drivers and vehicles to the test.

It was an exceptional experience. Full details next week about the new powerful BMW 760Li.

Writing in Media Post Eric Almquist, a Bain & Co. partner, observes that a large group of pre-retirement Boomers are entering a lifestage of economic parsimony. He notes an

unprecedented economic recession has caused fear and frugality though a huge portion of the buying public.

Is the recession here to stay, he asks because Boomer consumerism in these difficult times does appear bleak.

Almquist says, “The current Boomer mindset revolves around a nearly universal question: “Can I live off my savings and Social Security for the rest of my life?” This leads to greater risk aversion, obsessive price shopping, and an urge to preserve fiscal equilibrium.”

Kline believes that Boomers view discretionary purchases from an emerging framework. They are seeking more than value, where a product’s bundle of tangible and intangible attributes reach an optimum balance with price.

According to Kline, consumers are undertaking something akin to brand triage, assessing discretionary purchases as either indispensable or dispensable based on core values.

Today’s luxury industries are confronting convergence of two trends: Boomers entering a lifestage when traditional materialistic values become less important, plus a recessionary economy that for many has decimated prospects for retirement.

He believes the rules for marketing luxury products must change, and those failing to adapt branding and advertising strategies will suffer serious consequences. This is the future of luxury brands: not just value but core values; not just low prices but product longevity; and not just surface bling but deep customer connection.

Writing in Automotive News, Jamie LeRue detailed what  Bob Lutz told her in an interview:

“Agencies that can’t show results eventually will get reviewed. “If after strong senior management direction, the agency, for some reason, repeatedly fails to come up with a product where the customer says, “Yes! That’s exactly what I want’ and fails to move the needle, then obviously you start reviewing the agency.”

“I will always give existing agencies a chance because as one agency head once told me in my career, ‘The way the American automobile companies deal with agencies is almost a system that prevents brilliant advertising,'”

As can too much senior management involvement.  Enuf said.