We think the company wants to sell Opel to RHJI despite German federal and regional political pressures. 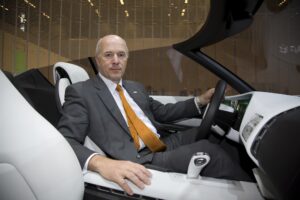 Presumably, Forster, who is now running GM Europe, has a future looking after Opel.

The chief negotiator for General Motors on the sale of Opel/Vauxhall in Europe published a blog post yesterday that in my view foreshadowed what GM thinks is a desirable outcome for the impending decision. It is a canny piece of communication in the midst of a political mess.

John Smith, a GM Group Vice President who normally looks after GM’s future product plans, is leading an effort that he says has always been about finding the “best solution”for Opel/Vauxhall. And he points out that, thus far, GM has not picked a favorite in spite of such assertions by some media outlets. For what it’s worth, in my dealings with John over the years, including when I was competing against him, I have found him to a straight talking man of his word.

The Opel matter has devolved into two buyer choices: The Canadian auto conglomerate Magna, which has strong European and German ties, or an investment group know as RHJI.

It is by most accounts a complicated negotiation, as we have noted before, since it will require the agreement of  labor unions, regional and federal  governments, financial  institutions and regulators, among others, to broker a deal to save Opel. And GM needs to save Opel engineering if the reorganized company is to have a good shot at surviving the brutal car wars of this decade.

If this was a horse race, not subject to fixing, I’d handicap it this way:

RHJI is the clear favorite since is a venture capital group that will look to sell off all or most of its stake in Opel for a profit as soon as possible. No doubt GM will negotiate favorable terms for itself on the buy back. This is completely consistent with GM’s, entirely rational, desire to protect its product a plan going forward, which Opel engineering is key to.

Magna is a long shot. It’s a potential competitor to GM globally, as well as a current supplier, and the Russian financing presents possible conflicts in a market that GM is expanding in.

But the political aspects mean this is no ordinary horse race, so such simple reasoning might not apply.

Here’s how Smith views the race since he says both bids being developed “bring both opportunities and challenges.”

Smith says Magna “is clearly preferred by several politicians and the Labor Bench.”

However “the bid presented to GM varied from the negotiations we had in the previous weeks and contained elements around intellectual property and our Russian operations that simply could not be implemented. GM has partners in other parts of the world who have joint ownership of these assets…we simply could not execute the deal as submitted.”

“In the meantime, discussions with Magna continue in earnest to resolve these challenges and to formulate a bid that can be implemented. We remain fully open to working these issues to a conclusion, but we cannot say when that process will conclude, other than to say, ‘as soon as possible’.”

Smith says “The bid from RHJI is completed and would represent a much simpler structure and would be easier to implement. It would require less monetary participation by the government and would keep our global alignments solid, while still creating an independent Opel/Vauxhall organization in Germany. This remains a reasonable and viable option to be considered as the very difficult issues around the Magna negotiations continue to be worked.”

So place your bet — complete, clean ready to go or complicated and dragging on into the German elections this fall.

But GM, understandably, needs to keep its options open given the politics of the situation.

“Our desire and intent throughout this very long and difficult process is to create the best scenario for the future of Opel/Vauxhall as the global industry rides out the most severe economic crisis since the Great Depression. For those of us who worked in and with Opel/Vauxhall during our careers – including myself – we only want what is best for this great brand.

“While I could fill pages attempting to respond to the volumes of misinformation, distortions and negative comments made about GM, our team and our intentions, during this process, let me state very clearly, and with great sincerity, that we’re committed to a positive outcome for all involved. It’s our hope that we will be able to present a very clean and workable bid for the consideration of the Opel Trust Board and the German authorities that will be selected based on the best economic and societal analysis. We still believe this can be closed by the end of September objective we have in front of us,” said Smith.