The End of the Auto Show?

Auto Makers are thinking about skipping the circuit. 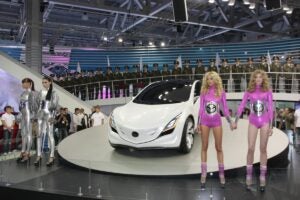 Just say nyet to auto shows: Costly events, like Moscow, or even Tokyo, could soon fade away.

The automotive world’s spotlight will hit Geneva, this week. The city by the lake plays host to Europe’s first big auto show of 2009, an event that will draw dozens of manufacturers and witness the launch of more than 50 new cars, trucks, concepts and crossovers – with the Tuesday news conference schedule alone bringing a news conference every 15 minutes from dawn to dusk.

Car makers and car journalists will have only a matter of weeks to recover before the industry’s next big show, in New York City. Indeed, the calendar is densely packed with car shows large and small, some little more than dealer exhibitions at a local mall, others like the Geneva Motor Show and Detroit’s North American International Auto Show, which has drawn as many as 70 different product “reveals” to its annual press days.

Under the helm of former CEO Jacques Nasser, Ford spent more than $50 million designing a new auto show stand for the Detroit show. Even a small presence at a major show, like the ones in Frankfurt, Paris or New York, can set a maker back by $3 million. But traditionally, manufacturers have considered that the price of doing business, as essential as the spots they run on network television. So, today, with every marketing dollar under close review, it’s probably no surprise that some carmakers are seriously rethinking their commitment to the auto show circuit.

A half-dozen brands, including Porsche, Land Rover, Ferrari and Nissan, pulled out of this year’s Detroit show. And now comes word that the latter Japanese maker will be scaling back elsewhere, as well. It will be on hand for Geneva, with a trio of launches to include the Pixo concept and Qazana crossover. It will make New York, as well, along with the Shanghai auto show in the boom market of China, and there’ll be a Nissan stand in Tokyo, this coming October. But don’t look for Nissan at the September 2009 Frankfurt Motor Show, or in Detroit or Chicago, next Winter. 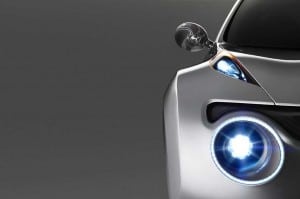 Nissan will remain part of the Geneva Motor Show, where it will unveil the new Qazana.

The auto show cutbacks, scheduled to start on April 1st, and run for at least a year, are primarily seen by Nissan management as a cost-cutting measure in the face of what a Japanese spokesman dubbed the “severe and prolonged” global automotive slump. The automaker is forecasting a $2.9 billion loss for the fiscal year ending March 31st – its first annual deficit since Carlos Ghosn was named CEO in 1999.

There’s also a question of cadence. In more flush times, manufacturers would stage an auto show event even if they didn’t have anything new to reveal. They might come up with a hastily cobbled-together concept vehicle, or simply trot out an executive to give a corporate update. But today, if there’s nothing new to unveil, economics suggest skipping one show in favor of another.

Indeed, some manufacturers are wondering whether to skip the auto show circuit entirely. That’s been a heretical position, until now, and even these days, most makers aren’t willing – at least, on the record – to suggest that the auto show is dead. But in private conversations, the topic is becoming one more frequently heard.

“Auto shows don’t sell cars,” contends Mike Jackson, CEO of the giant automotive retail chain, AutoNation. Jackson says there’s a value for a manufacturer to participate in high-visibility shows, such as Detroit and Geneva, where thousands, sometimes more than 10,000 journalists can pack in during media days. It’s another thing entirely when it comes to more public shows, where press coverage is light to non-existent.

“Nonsense,” counters Paul Brian, one of the senior organizers of February’s Chicago Auto Show. He notes that the annual Windy City event draws more than a million potential customers into McCormick Center, each year, even in a horrid economy, like today’s. And there’ve been many a study, such as those regularly released by the Detroit Auto Dealers Association, sponsors of the NAIAS, arguing that a high percentage of show-goers wind up buying vehicles during the next 12 to 18 months.

But “the costs don’t outweigh the benefits,” declares one Big Three executive, asking not to be identified by name. While he says his company won’t be the first to drop off the circuit, it won’t be the last, either.

Which show would be first to go? Among the most vulnerable is the biennial event in Tokyo, which has steadily faded in significance over the last decade. That reflects several factors: the decline of the Japanese auto market, now operating at a 34-year low; the essentially closed nature of the Japanese auto market, where Western importers are increasingly frustrated by their inability to gain share; and the emergence of the nearby Chinese market, wide open by comparison and on its way to becoming the world’s largest. Weeks ago, with numerous automakers threatening to walk out, Tokyo Motor Show organizers threatened to cancel the event, though it now looks like a weakened version will take place, in October.

Competitive pressures could keep carmakers from walking away from auto shows entirely – much as the industry is afraid to abandon network television, even though rising commercial costs and fast-declining audience numbers would suggest that’s a logical move. But it’s quite likely that more makers will rethink their budgets, dropping out of some shows and scaling back at others.

It didn’t take a trained eye to see that several key manufacturers curbed their presence at the Detroit show, this year. Cash-strapped Chrysler’s exhibit was less fancy than a typical new car showroom. And GM’s wasn’t much fancier. Gone was the multi-story display, and the slick theater used to stage press presentations. “When you’re under severe financial stress and have loans you’re going to have to repay, you start prioritizing what’s important,” explains outgoing Vice Chairman Bob Lutz. GM President Fritz Henderson, meanwhile, contends that eliminating the laser light shows and other high-tech gimmickry actually put more focus on the new products.

It’s not that carmakers want to walk away from consumers. Quite the contrary. There are a growing number of specialty events staged around the U.S. each year. Chrysler, for example, held roughly a dozen regional, one-manufacturer shows to highlight the launch of the completely-redesigned Dodge Ram pickup, last year. Toyota’s youthful Scion brand regularly stages events designed to build loyalty among current owners and attract new buyers.

There was strong support for an event staged during last year’s Woodward Dream Cruise, where nine manufacturers rolled out their latest green machines – including EVs, diesels, hydrogen vehicles and hybrids – and let consumers actually drive some current and future products. (In full disclosure, I was personally involved in the organization of the event, dubbed NextCruise.) And similar exhibitions could supplement or even replace traditional auto shows.

It’s been more than 100 years since the first car shows were staged. The earliest of those events featured an assortment of primitive machines, and notably, there were as many electric vehicles and steam-powered cars as there were those running on gasoline. A century later, manufacturers are again rethinking the very basics of their business, down to the engines that make their vehicles run. It should be no surprise, then, that they’re testing the merits of the auto show. Nissan’s decision to remain a force at some events indicates the auto show won’t die overnight. But it will come under increasing pressure. Weaker shows could vanish, and even the strongest could see sharp cutbacks. These days, everything is up for review.