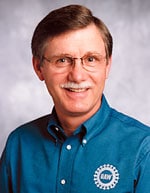 For more than a month, the assumption around Detroit has been that the United Auto Workers would agree to concessions as part of the restructuring plans General Motors and Chrysler LLC have to turn in next month. UAW president Ron Gettelfinger Wednesday said the union remains willing to consider additional concessions.  That’s prompting headlines, this morning, that givebacks are essentially a fait accompli.

But — and it’s a mighty big but – he also noted union members already had made plenty of sacrifices and suggested that the union wasn’t about to be stampeded into making additional cuts in its contracts with GM and Chrysler (and be likely pressed to match any givebacks with concessions for Ford, the only Big Three maker to opt out of the federal bailout program).

Gettelfinger also ripped into the Republican senators that had tormented the union by demanding wage cuts and other concessions from the UAW, suggesting their criticism of the UAW contracts was highly selective and highly partisan.

In addition, before the UAW makes any kind of concessions, the UAW wants to be able to examine the “books” of the American subsidiaries of foreign makers such as Toyota, Honda and Nissan so they can see if the transplants actually have a labor cost advantage, he said.  “I’m not going to take somebody else’s word for it,” Gettelfinger said, after his speech at the Automotive News World Congress. “I  want to have our own research department take a look at it,” he said.

“It’s better to have a solid plan than a deadline that forces you to put a plan together,” added Gettelfinger when asked about the loan-requirements that negotiations on union concessions wrap up by Feb. 17.

Gettelfinger also suggested the new “car czar” that the Obama administration will appoint to oversee the increasingly complex bailout of the U.S. auto industry should examine the subsidies used by states such as Alabama to lure foreign automakers to build plants in their states. The subsidies are having an adverse impact on competition and killing jobs at American companies, Gettelfinger said.

Car- and truck-producing countries in Asia and Europe have rung up major automotive surpluses with the United States, Gettelfinger noted during his speech.

“We must take action to fix our broken trading system,” said Gettelfinger, who said, “We can no longer afford to have the most open market in the world, while other countries use currency manipulation and non-tariff barriers to keep U.S. products out. The deficit in automotive trade alone is expected to hit over $100 billion.  We have an automotive trade imbalance with every single one of our major trading partners, even England which has a relatively small auto industry,” Gettelfinger said.

“We will never stabilize the U.S. auto industry or our economy if we continue to buy more than we sell from every other industrialized nation,” he said.